Rosli Ismail and his wife Mariam Roin wake up at 6am everyday to buy 3kg of fish for the cats.

The fruit sellers, who are both 47, would boil half of it to feed 30 cats at their home in Alor Janggus while the other half would be brought to the marketplace where they trade.

"I will ask a restaurant to fry the fish before mixing with 2kg of rice to feed some 50 stray cats.

Read Also
Like a son but cheaper: harried South Koreans pamper pets instead of having kids 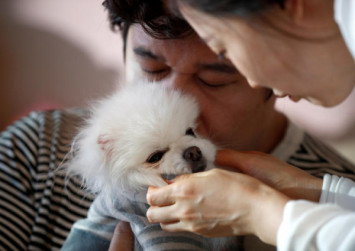 "We also provide milk and cat food in packets especially for hungry kittens," said Rosli, who started feeding the cats with his wife two years ago.

He said that he could not stand seeing the cats hungry or mistreated.

Mariam said they plan to one day start a cat hotel business.