Covid-19: Mandatory testing of foreign workers pays off in Malaysia

PETALING JAYA - The latest cluster of Covid-19 cases at a construction site was detected because of the mandatory testing of foreign workers in the sector, says Senior Minister Datuk Seri Ismail Sabri Yaakob (pic).

The contractor had adhered to the standard operating procedure (SOP) of mandatory screening for foreign workers in the construction and security sectors, he said.

He reasoned that if the government had not made it mandatory, these foreign workers could have spread the disease to others.

"If they were not tested, these 44 workers could have been at KLCC during the Hari Raya holidays. We have stopped the virus from spreading among themselves and also to Malaysians, " he said during his daily press briefing yesterday.

On Monday, the Health Ministry said it detected 44 Covid-19 cases at a construction site in Kuala Lumpur.

About 400 workers had undergone testing, with the 44 positive cases sent to the Sungai Buloh Hospital for treatment. Their close contacts had been quarantined. The construction site and rumah kongsi (workers' quarters) have been shut for disinfection.

Ismail Sabri also said that the Construction Industry Development Board (CIDB) would inspect sites to ensure the SOP was adhered to during the conditional movement control order.

He said 5,236 construction sites had been inspected, with 728 sites found to have adhered to the SOP while 209 did not and were given a warning. Seven sites were ordered to be closed, while 4,292 sites were not yet in operation, he added.

Read Also
Covid-19 patients will be discharged even if they test positive after 14 days, says Malaysia's health chief 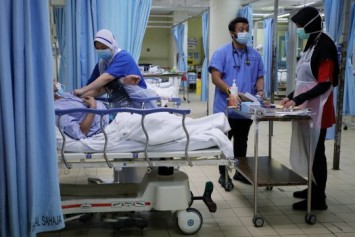 Ismail Sabri said 27,383 construction workers had been screened for Covid-19 but he did not specify how many tested positive.

He said the government had amended the Workers' Minimum Standards of Housing and Amenities (Amendment) Act last year, but the law had yet to be implemented.

"The Act is detailed about foreign worker housing - from area size and the ratio of how many people can live there, " he said.

The Human Resources Ministry will make an announcement on the law today.

Ismail said the subject was discussed by the special Cabinet committee meeting on foreign labour, that was chaired by him.

He said there were other policies on foreign labour, which would be presented to the Cabinet.