PETALING JAYA - From an Ohio prison becoming the "most intensely infected institution" in the United States to a Jakarta warden worried about overcrowded jails, the spotlight is now on curbing Covid-19 infections behind bars.

For now, a spokesman from the Prisons Department in Malaysia said there were no reported positive cases among the estimated 72,000 inmates in all of its institutions.

He said the department had put in place stringent measures to ensure that all its facilities nationwide remained Covid-19 free.

Appropriate steps and a clear guideline had been adopted to curb the spread of the virus, he said.

Prisons Department director-general Datuk Seri Zulkifli Omar previously asked the judiciary to stop jailing violators of the movement control order to avoid overcrowding in prisons which could lead to a contagion in prisons.

The head of the International Committee of the Red Cross (ICRC) regional delegation in Kuala Lumpur Biljana Milosevic had commended the move, saying that it was in line with other international global position on the issue of overcrowding in places of detention and the added risk of infection faced by detainees.

The Prisons Department said face masks and hand sanitisers were provided to all prison staff and inmates.

"In fact, new inmates will be quarantined first to check the health status and ensure that they do not bring infectious diseases into the prison institution," said the department.

It has also taken the initiative to sanitise and disinfect each and every prison to further reduce the risk of Covid-19 among the inmates.

"Each inmate will be given the necessary attention and their health status monitored while in prison," noted the department. 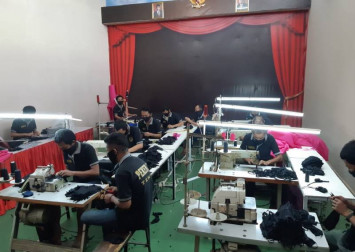 "Should any inmate show any Covid-19 symptoms, the person will be quarantined in isolation blocks to stop the virus from spreading."

It also reiterated that family members and relevant parties must give full co-operation and place their trust in the department to carry out its responsibilities as the caretaker of corrective services.

"We hope with our collective efforts and prayers, our country will be free from Covid-19," it said.

According to news reports, more than 30,000 cases of Covid-19 were detected among inmates and guards in the United States.

Data compiled from official sources by the Covid-19 Behind Bars Project of the UCLA law school showed that out of more than two million people incarcerated nationwide, there were 21,007 confirmed Covid-19 cases and 295 deaths.