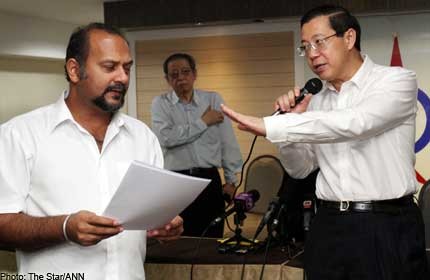 (from left) Gobind Singh Deo, Lim Kit Siang and Lim Guan Eng after an emergency central executive committee meeting on Wed, Jul 31, 2013 to discuss its next course of action following the Registrar of Societies' (ROS) decision that the party will need to hold fresh polls.

GEORGE TOWN - The Registrar of Societies (ROS) does not have to explain its decisions to a political party under the Societies Act 1966, said the body in its latest reply to the DAP.

In the letter signed by Dasmond Das Michael Das, ROS has again reminded the DAP to hold fresh party elections.

He said ROS came to its decision based on the provisions of the Act, and it was not based on "force or revenge".

DAP secretary-general Lim Guan Eng, who released copies of the letter dated Aug 7 to the press, said he was disappointed with the reply since no reason was given for the need to hold fresh central executive committee (CEC) elections.

"The ROS has gone overboard and is unreasonable," Lim said during a press conference at his office in Komtar yesterday.

"I would like to say that the DAP has no problem holding fresh CEC polls but give us the reasons and under what section of the Societies Act are they directing DAP to hold fresh elections," he added.

Lim also asked the ROS to show proof that the party did not give full cooperation in the investigations.

"I am willing to meet the ROS in Putrajaya. Why are they scared to meet me? Show proof of your allegation that the DAP did not cooperate," he said.

Dasmond said the DAP representatives who met the ROS during the investigations often asked for postponement of meetings or to shorten the process of the probe by giving excuses that they were busy with party politics.

He added that DAP also often delayed sending necessary information or did not prepare it although they had been told to do so earlier.

ROS came into the picture after complaints of electoral fraud surfaced in the aftermath of the December elections.

Lim's political secretary Zairil Khir Johari had initially received 305 votes but, after what was claimed to be a technical error, was subsequently pronounced as having 803 votes.