Datuk Seri being led to a magistrate's court in Putrajaya where his four-day remand was approved.

PUTRAJAYA - Graft busters have arrested a third individual said to be involved in the supply of equipment in a military vehicle scandal.

The 39-year-old owner of a company has been held over suspicion of offering money to secure the supply contract.

It is learnt that the suspect - a Datuk Seri - was held following the arrest of a company chief executive officer and chief financial officer last week.

"The Datuk Seri was arrested as we want to investigate claims that he offered money to get the contract awarded by the company whose CEO and CFO were arrested last week," said a source.

But the source did not have details on the amount the company owner was alleged to have paid to get the contract. 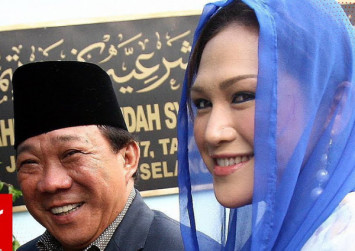 The man was arrested at the MACC headquarters around 11pm on Sunday when he was called to answer queries pertaining to the case.

Last week, a CEO and CFO were remanded as investigators probed claims that they accepted bribes of several hundred thousands of ringgit from contractors in exchange for contracts to supply equipment for military armoured vehicles.

The project, said to be worth RM17 million (S$5.6 million) , involved the armed forces' AV8 and Adnan carriers.