SHAH ALAM, Malaysia - Family-friendly karaoke joints have been identified as new haunts for drug dealers looking to offload their supply to addicts here.

Selangor police discovered this new tactic after raiding one such outlet at Batu Tiga in Klang recently and arrested two guest relations officers and a customer.

"Based on the questioning, we then conducted another raid in Setia Alam and arrested another man aged 42.

"We found 1,200 esctasy pills on him. He led us to an apartment where we found 800 Erimin 5 pills, 9,000 ecstasy pills and 500g of ketamine," he told reporters at the Shah Alam police headquarters yesterday.

He said the suspect worked as a e-hailing driver and did not have a criminal record. 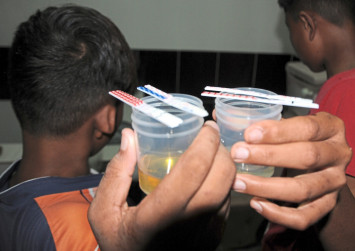 "We have remanded the suspect for five days," he said.

He also urged parents to keep a close eye on their children following the latest tactic.

"We searched his car and found 40 packets containing drugs believed to be 235g of ganja and 100g of syabu," he added.

"The suspect does not have a prior criminal record and has been remanded for seven days to help with investigations.

"Both cases are being investigated under Section 39b of the Dangerous Drugs Act 1952," he said.