IS declares war on Malaysia and Indonesia 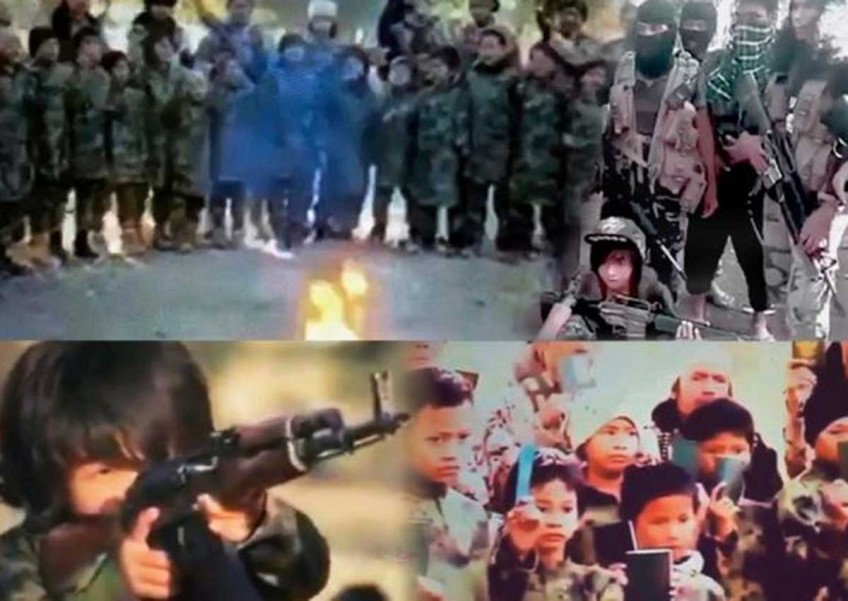 A montage of the IS video put out on the Internet, some purportedly showing a child soldier and Malaysian passports being burned.
The Star/ANN

PETALING JAYA: A gun-toting adult is surrounded by children, and a teen standing away from the group is seen cradling an AK-47 assault rifle.

The man is wagging his right index finger back and forth, and talks in a mix of Bahasa Malaysia and what sounded like Arabic.

He expresses gratitude to Allah for "easing our journey and jihad" and for appointing them as "soldiers of Tawhid (The Oneness of God)".

He called out to the authorities of the nusantara (archipelago) - especially in Malaysia and Indonesia.

"Know this ... we are no longer your citizens, and have liberated ourselves from you," he said as the camera panned to show a goateed man nearby holding another Malaysian passport.

"With His permission and His assistance, we will come to you with a military force that you cannot overcome.

"This is Allah's promise to us," he said.

These footages are seen in one of the video clips released by the IS.

The man also referred to the toppling of governments and leaders who did not follow Islamic principles to make way for the supremacy of Islam.

Shortly later, he threw his passport into the middle of the circle, and the children followed suit.

A young boy stepped forward with a silver lighter and uttered Bismillah before lighting up a folded piece of white paper.

He then placed it among the pile of documents to set the heap ablaze, a sight which is greeted by raucous cheers and singing from the other children as their fists punched the air.

The scene then moves to a classroom setting, depicting children wearing songkok chanting during religious lessons supervised by an adult, and undergoing combat training under the watchful eyes of another.

They also go through outdoor learning sessions, where a man in a red headwrap conducted quizzes for his young charges.

In another clip of a sandy clearing surrounded by coniferous trees, children stood in line as they fired rounds from semi-automatic pistols.

In a testament to their tender years, their small bodies jerked back from the recoil, with the hems of their oversized camouflage fatigues falling past their knees.

An adult nearby, clad in camel khakis, long-sleeved shirt and a vest, raised his right fist, shouting takbir as the children followed suit with a chorus of Allahu Akbar (God is Great).