Doctor ‘Predator’ a hit with netizens 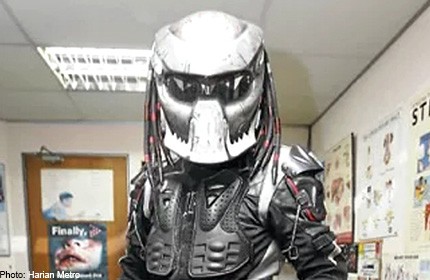 MALAYSIA - He reportedly fashioned the suit for safety reasons.

It has also earned Dr Loi a nickname: Predator Malaysia.

Dr Loi is the president of the Medical Practitioners Coalition Association of Malaysia.

In an interview with Malaysian daily Harian Metro on Tuesday in Kuala Lumpur, he said the pictures were taken at the Subang Jaya police station early this month.

He said: "I was there to make a police report about the selling of fake medical certificates I found on Facebook, but I did not realise my motorcycle suit would be the focus of the policemen on duty.

"After I made the report, they asked me to put on my helmet in the shape of the Predator mask so they could take a picture of me posing on my motorcycle.

"But they uploaded the pictures online without my knowledge."

Dr Loi claimed that in the last three years he has spent about RM85,000 (S$33,000) on three Predator-inspired riding suits that also double as highquality safety gear.

A fan of the 1987 film, he said he fashioned the distinctive helmet with the help of a crash helmet designer based in Russia.

On why he spent so much on his safety suits, Dr Loi said: "Five of my friends died in motorcycle accidents, so that's when I realised I need to create a suit that is not only unique but also very safe."

The doctor claims that the Predator suit has never got him into trouble with the authorities because it meets international safety standards.

He said: "There is no denying that whenever I stop at a traffic light, I get stares from other motorists.

"But what makes me happy is that the suit keeps me safe while I am on the road."