BANGI - Pakatan Harapan leaders should not be blinded by power and flaunt their wealth now that they are heading the government, says Datuk Seri Anwar Ibrahim (pic).

The PKR president said the signs were already obvious within Pakatan itself, and that "yes men" would surround them in order to defend their acts.

"This is not just with Barisan Nasional as those in power can suddenly show extravagant wealth.

"Even if they are friends within the party or our own coalition, we have to advice them," he said in his address to mark the first anniversary of his release from prison.

Read Also
Singapore will be one of first countries I visit as PM: Malaysian leader Anwar Ibrahim 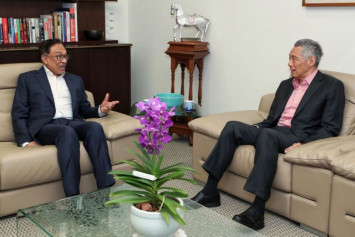 He was speaking after breaking fast with several Muslim non-governmental organisations at a hotel here yesterday.

Anwar said not long after they came to power, several Pakatan leaders could be seen leading lavish lifestyles.

"The public will become cynical about whether the Malaysian Anti-Corruption Commission will take action against the leadership.

The prime minister-in-waiting said he aspired to uphold Islamic principles if given the chance to take over the leadership.

"Insya-Allah, if I am given the space to administer the country, I would be a leader with a clear standing and confidence in Islam.

"We will also show concern and love towards our brothers and sisters among non-Muslims, the Christians and Hindus as they are loyal to us," added the Port Dickson MP.At a press conference later, Anwar said Muslim civil society groups must be in the forefront to highlight and raise awareness regarding their rights to the public and not be drowned by smaller groups with a "louder voice".