Don't 'wait for me' at airport, Chong Wei tells media, says he wants to rest first

SEPANG - Lee Chong Wei will call for a press conference over the next few days to provide updates on his nose cancer treatment and his future.

The three-time badminton Olympic silver medallist was slated to fly home from Taiwan on Sunday (Oct 7) but he did not show up, although the media were waiting for him at both the Kuala Lumpur International Airport (KLIA) here and Sultan Abdul Aziz Shah Airport in Subang.

No flight details were revealed by Badminton Association of Malaysia (BAM) president Datuk Seri Norza Zakaria when he confirmed on Saturday (Oct 6) that Chong Wei would return on Sunday.

Several journalists tried to contact Chong Wei to find out the time and location of his arrival, and he eventually responded to one of them.

In a brief voice note, Chong Wei did not confirm if he had returned but merely asked the media to respect his privacy. 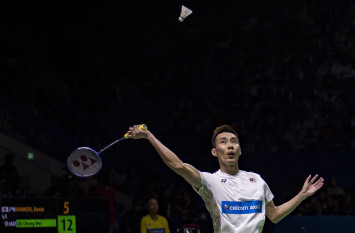 He promised to address the media when he's ready.

"All of you do not have to wait for me, I need to rest for now and I'll meet members of the media one day," said Chong Wei.

"I don't want the media to wait for me at the airport, you may go home.

"I intend to take a few days of rest before meeting the press later."

Chong Wei had been cleared by his medical team to fly home after spending two months in Taiwan to undergo treatment for his early-stage cancer.

He first shocked the nation when he was absent from training for two weeks, only for BAM to reveal later that he had been diagnosed with a "respiratory-related disease".

Social media was buzzing with news that Chong Wei had something more serious. But it wasn't until recently that it was confirmed as "early stage nose cancer".

Chong Wei later pulled out from the World Championships in Nanjing and the Asian Games which took place in August, after he suspected something was amiss following a semi-final exit at the Indonesian Open in Jakarta.

Prior to the Indonesian Open, he was in smashing form when he upstaged hotshot Kento Momota of Japan en route to winning his 12th Malaysian Open title.
#Lee Chong Wei #cancer