The former prime minister pointed out that Pakatan leaders had agreed for him to chair the presidential council and said, "I'm a top dog there, lah."

But he also said that he did not mind if Anwar was made prime minister.

"Yes, if that is what people want, why not," he said during a press conference at the Perdana Leader­ship Foundation.

After initially claiming all the leaders were "equal", Dr Mahathir later conceded a country could not have three prime ministers at the same time.

He said Pakatan needed to have one leader, but added that there was no problem with the coalition's leadership hierarchy.

Dr Mahathir previously denied backing Anwar as a possible prime ministerial candidate in an interview with British daily The Guardian.

He had pointed out that Anwar could not become the next prime minister as he needed to be released from jail first.

During their 1998 falling-out, Dr Mahathir had also called his former deputy "unfit" to become the prime minister over sodomy charges against the latter.

Asked whether he still stood by his statement now, Dr Mahathir said he did.

"It depended on the circumstances prevailing at the time. I might change my mind again next year. You just wait," he said. 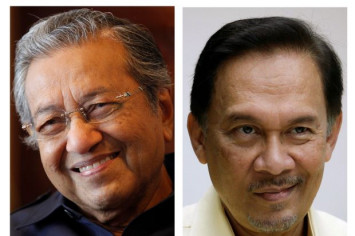 Earlier, Dr Mahathir challenged Prime Minister Datuk Seri Najib Tun Razak to a debate, adding it could serve as an opportunity for both of them to clear their names.

The proposed Nothing To Hide 2.0 debate will be on Aug 13 in Shah Alam.