Dr Mahathir: Sultan Ibrahim and I will be frank and open with each other

JOHOR BARU - Tun Dr Mahathir Mohamad says he and the Johor's Sultan Ibrahim Almarhum Sultan Iskandar, have agreed to be frank and open with each other.

The Prime Minister said Sultan Ibrahim had consented to meeting or contacting each other if there is a need to discuss any issue in the future.

Referring to Thursday's audience with Sultan Ibrahim, Dr Mahathir said: "Ours was a normal discussion, as usual.

Dr Mahathir said this was among the matters discussed during his audience with Sultan Ibrahim at Istana Bukit Serene here on Thursday (Jan 10).

Dr Mahathir said this to reporters at the Senai International Airport before flying back to Kuala Lumpur. 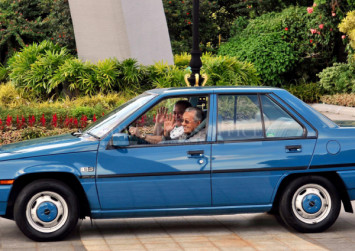 Asked what else was discussed at their 90-minute meeting, the Prime Minister said various matters were touched upon but it was not necessary to speak about them.

On whether the election of the new Yang di-Pertuan Agong was discussed, Dr Mahathir said any matter about the Rulers had nothing to do with him.

Dr Mahathir, who is chairman of Parti Pribumi Bersatu Malaysia and the ruling Pakatan Harapan coalition, said the last time he met Sultan Ibrahim was almost 20 years ago when he stepped down as the fourth prime minister in 2003.

Earlier, Dr Mahathir had flown to the Senai airport at 3.30pm in a special aircraft.

He arrived at the palace at about 4pm, and was welcomed by Sultan Ibrahim and Johor Permaisuri Raja Zarith Sofiah Almarhum Sultan Idris Shah.

After the audience, Sultan Ibrahim personally drove Dr Mahathir to the airport in a blue first-generation Proton Saga bearing the registration number "Proton 1".

Dr Mahathir had presented the car to the Sultan's father, Almarhum Sultan Iskandar Sultan Ismail, in 1985.