KUALA LUMPUR - Malaysians need to brace for new taxes which involve some necessary sacrifice and pain.

This is to allow the government to raise new revenue in order to repay the massive debts incurred by the previous administration.

These were the key messages by the Prime Minister ahead of Budget 2019 to be tabled in the Dewan Rakyat on Nov 2.

He said there had been a suggestion that the government introduce new taxes.

"I don't think that is something welcome by the people but we may have to devise new taxes in order to have the money to pay our debts," he said in his keynote address at the conference "Malaysia: A New Dawn".

Dr Mahathir acknowledged that Malaysia's GDP (Gross Domestic Product) growth was alright but it had "decoupled" from the welfare and well-being of the people. 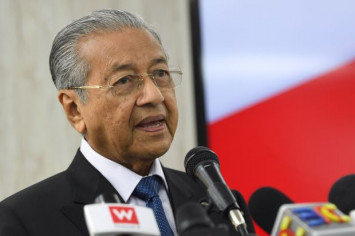 "The people suffered from a high cost of living, uncertainties, pressures applied by the then govern­ment, so much so that they no longer had faith in this country," he said.

Dr Mahathir said the government could sell some of its assets in order to raise the funds needed to repay its debts.

Land owned by the government, he said, was one type of asset which could be sold.

He noted, though, that the previous government had sold a lot of land to foreigners.

"I don't think that would be good for us, but we can still sell land to locals so that they can develop housing projects and settlements that they believe will give them returns."

The Prime Minister said the government might also have to sell some of its other valuable assets. He did not elaborate further on this.

Despite the challenges, Dr Mahathir said the government was hopeful that it could manage all its problems.

He said the government's confidence was based on its faith in the people who had shown that they could weather economic problems such as the financial crisis in 1997-1998.

The Prime Minister said the government aimed to increase investments in Malaysia in order to grow the economy.

Malaysia at one point was known as an Asian tiger, he said.

"Now the tiger is a very small kitten. With forums like this, with people throwing up ideas and the government being receptive and implementing them, I am quite sure that country will grow to become yet another tiger."

Speaking to reporters later, Dr Mahathir said the new tax regime would be different from the Sales and Service Tax (SST).

"It will be different and less of a burden to the people," he said.

Finance Minister Lim Guan Eng, who spoke after Dr Mahathir, said while the economic fundamentals were still sound, Malaysians must be willing to expect some pain and even make some sacrifices.

This was because fiscal consolidation would not be achieved easily, he said.

He said Malaysia would not suffer from twin deficits but would continue to enjoy a current account surplus.

"The monetary sector is robust with banks enjoying low Non-Performing Loans (NPL) and well-capitalised with the capital market also stable.

"However, in the interests of transparency, fiscal consolidation will not be achieved easily, and we must be willing to expect some pain and even offer some sacrifice.

"We would need three years to resolve the fiscal issues caused by the RM1 trillion (S$332 billion) debt and the RM35bil GST and income tax refunds," he said.

Lim said the government believed that institutional reforms would give investors certainty and confidence in the system.

"This will not be easy, but I believe it can be done. After all, it is always darkest just before dawn," he said.

"TRC has been given the mandate to minimise the tax gap, diversify the tax revenue and make the tax system more neutral, efficient and progressive.

"It is also tasked to explore ways to minimise leakages and evasion.

"The same committee will review all tax incentives given out previously to ensure that these measures are still relevant and supportive of high-quality economic growth," he added.