BEIJING - The East Coast Rail Link and the projects for the construction of two gas pipelines with China have been cancelled, said Malaysian Prime Minister Mahathir Mohamad.

Tun Dr Mahathir said the projects could not go on due to Malaysia's financial woes.

However, details of the cancellation, including such matters as compensation, would have to be discussed later, he said at a press conference before ending his five-day visit to China on Tuesday (Aug 21). 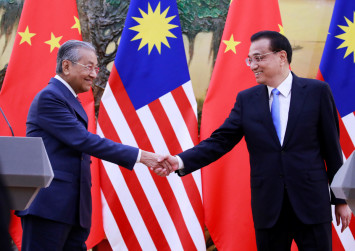 The Prime Minister said that the current priority for Malaysia is to reduce its debts and loans, according to New Straits Times.

"If we have to pay compensation, we have to pay. This is the stupidity of the negotiations before. We must find a way to exit these projects...this is our own people's stupidity," said Dr Mahathir, according to the South China Morning Post.