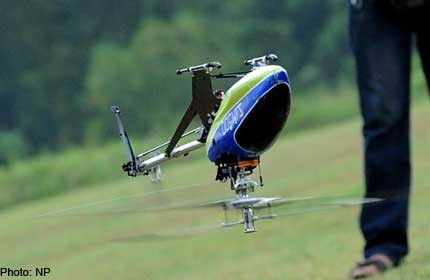 MALAYSIA - Equipped with high-definition cameras and rechargeable batteries that last up to 15 minutes, "spy copters" are available easily at shopping malls in Malaysia.

The remote-controlled aerial vehicles, generally used for aerial photography and mapping, can fly up to 13 storeys high. They are also built for rainy conditions.

A seller at Paradigm Mall, who did not want to be named, said the spy copters cost between RM1,200 (S$465) and RM1,500 - depending on their specifications - and were popular.

"A lot of people are buying them now. Sales are very good. Even people from other countries come here to buy them," she said.

Another store owner said he had seen good sales recently.

He said: "These hexacopters (with six blades) are very popular among remote-controlled-toy enthusiasts."

At a press conference on Friday, Malaysian Chinese Association Youth chief Wee Ka Siong showed the press a remote-controlled aerial vehicle which was allegedly spying on his bungalow in Bukit Tiara, Cheras. He said his neighbour's son discovered the vehicle on the rooftop balcony.

While some people are questioning the legitimacy of such gadgets, criminal lawyer Gerard Lazarus said privacy laws do not extend to the airspace above a house.

He said: "Unless the (device) enters your house, you may not be able to argue that it is trespassing. If it was taking footage of the general area, the operator has not committed an offence unless it is proven that he was spying specifically on you."