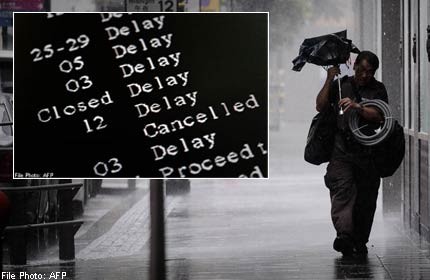 A man holds his broken umbrella against heavy winds on August 13, 2013. Flights are also delayed or cancelled due to the typhoon (insert).

PETALING JAYA - Malaysia has not been spared from the effects of the Typhoon Utor, which is currently lashing Hong Kong.

The Meteorological Department said Utor, which had brought forth strong winds and caused flight cancellations, was to be blamed for the drier weather in peninsular Malaysia as well as more rain in Sabah in the past few days.

"Some areas in peninsular Malaysia have had somewhat drier weather.

"However, there was more rain in Sabah because of its proximity to the typhoon," said the department's central forecasting office director Muhammad Helmi Abdullah.

Convergent winds towards the typhoon, he said, had been drawing moisture from nearby regions.

"The impact is not that great now because it is moving further away from our region.

"But since Sabah is nearest to the typhoon, it still gets Utor's tail effect," he said.

According to a typhoon advisory issued by the department, Utor was about 1,714km northwest of Kudat, Sabah, as at 2pm yesterday.

It also warned of strong winds and rough seas in waters off Labuan, Sabah and most of the South China Sea.

These worsening conditions - with waves measuring up to 3.5m - were dangerous to small crafts, recreational sea activities and sea sports - are expected to continue until today.

Typhoon Utor developed on Aug 10 and stormed through the Philippines.

It was expected to reach China last night or today.

It was reported that strong winds and heavy rain from the typhoon had caused public officials in Hong Kong to close courts, ferry terminals and schools.

[[nid:34562]]
SUBSCRIBE TO OUR NEWSLETTER
Your daily good stuff - AsiaOne stories delivered straight to your inbox