GEORGE TOWN - Eight-year-old Muhammad Saifuddin Ali Subahan could have found a lighter and was playing with fire before the container cabin he was in went up in flames and took his life in Kampung Jawa here.

Balik Pulau OCPD Supt A. Anbalagan said an eyewitness claimed to have seen the boy playing with a lighter before the fire broke out.

"We believe the eyewitness was also at the scene when the fire broke out because part of his hair was burnt," said Supt Anbalagan, adding that the abandoned cabin was used as a store by traders in the area, while villagers nearby like lounging on a sofa that was in it.

It is learned that several of Muhammad Saifuddin's friends managed to escape through the cabin door when the fire got out of control, but Muhammad Saifuddin was trapped at the back of the cabin and his path to the door was blocked by the growing blaze. 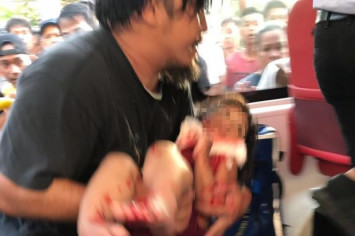 During the fire, at about noon yesterday, villagers scrambled to rescue Muhammad Saifuddin, but time ran short.

The door was locked so they kicked and tried to break the corrugated steel sheet walls of the cabin located at the playground, but were unable to free the Year Two SK Bayan Baru pupil trapped inside.

"We heard screams and rushed to fill up pails of water to extinguish the fire.

"Some of us tried to kick apart the cabin's walls. It bent but wouldn't break apart.

"Within minutes, the fire started raging and it got too hot for us to get close," said a villager at the scene.

The boy's father Subahan Seenu (pic), 37, was sobbing uncontrollably at the scene.

"When they told me he was burnt, I thought it was a minor injury.

"I never expected him to be gone.

"We were watching cartoon together at home in the morning and I gave him RM2 to buy breakfast for himself," said Subahan.

He said Muhammad Saifuddin was the third of four siblings aged between 11 and one month old.

Firemen received the distress call about 12.15pm and arrived at the scene minutes later.

They put out the fire at 12.40pm. Bayan Baru Fire and Rescue Department station chief Mohamad Tarmizi Abdul Salam said Muhammad Saifuddin's charred body was found in the back corner of the cabin.

The boy's body was sent to Penang Hospital for post-mortem.

Police have ruled out foul play and classified the case as sudden death.