This week, families across Malaysia gathered for Reunion Dinner, the most important meal of the Lunar New Year season. With some travelling across the country to make it home in time, it's an occasion when several generations of a family can sit down to usher in the new year and take stock of their togetherness.

Unfortunately, not everyone gets a chance to spend time with their loved ones during this period. TC Lam* (not his real name), a retiree who stays in a senior citizens home just outside Kuala Lumpur, is spending the holiday season with other residents whose families have not contacted them.

"I wanted to come to the home," said Lam, 91. "When I stayed with my son and his wife I only got scoldings, complaints. I am old, I forget many things, but they will always be upset even if it is a small thing. Once they left me at home and disappeared for three days, later I found out they went on a holiday. Nobody talked to me or told me anything."

Although Lam did not part with his family on the best of terms, he did not expect them to cut off contact. He hasn't heard from them in eight months, and when the new year rolled around he didn't receive a single phone call.

Lam's story is not unique in Malaysia, where experts claim elder abuse and neglect is prevalent. Although no official statistics exist on the phenomenon, studies from academics affiliated with University Malaya's Prevent Elder Abuse and Neglect Initiative (Peace) posit that one in every 20 elders is abused in rural areas. For urban communities, academics believe the figure is closer to 1 in 10.

Financial abuse is most common in rural areas, while in urban areas psychological abuse was most prevalent. Neglect, too, often occurs in both settings.

This may change soon, however, as the government has announced its willingness to look into a law that will protect neglected parents. Minister in the Prime Minister's Department P. Waythamoorthy said on Monday that an in-depth feasibility study would be required before any laws could be tabled or implemented.

"It is really inappropriate for any child to neglect or abuse his or her parents and I think, if there is a need, we can have a law to protect those senior citizens and to ensure that their children could not simply wash their hands of their responsibility to take care of the parents," he was reported as saying by government news agency Bernama.

The Women, Family and Community Development Ministry is currently conducting this study, although a bill may only be drafted as late as 2020. 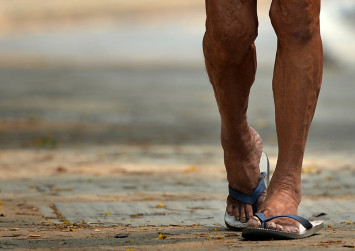 The Ministry's Policy Department undersecretary Chua Choon Hwa said this year would be taken up by the study. "[Elder] neglect and abuse, it's covered under the Domestic Violence Act. But not many have come forward [with complaints] as yet."

Care-home managers have asked the government to ensure that the law is carefully thought out so as to be fair to all parties.

Richard See* (not his real name), who manages a home situated an hour's drive from Kuala Lumpur, the capital, said more people these days had to work because of the high cost of living, while in the past they were more able to be primary carers to ageing parents.

"The cost of living is so high, one person working is insufficient to pay off car, house, education loans. So everyone in a family is working. If you keep an older parent at home, who can take care of them?" he said.

"Some people feel they cannot handle this and have no choice to put them in a home that provides good service. If the government wants to implement this law, they must take into consideration the financial capabilities of modern middle-class families."

However, See said, some children have adopted an "out of sight, out of mind' approach to their parents. "We have had cases of children 'dumping' their parents here, providing false addresses and contact numbers so we can't reach them. They just don't want to shoulder the responsibilities."

Cases like this, See believes, fall under the category of neglect and are among the most heartbreaking.

"In many cases they will cry, call out for their kids, but what to do? We can only try to console them, attend to their needs, treat them like our own parents, what else can we do?"

Although some of the home's residents were with their families this Lunar New Year, others were left to their own devices in the home.

"We arrange a small gathering for those who don't go back, cook something nice, sometimes youngsters come by and chitchat and share goodies as part of their community outreach work," See said.

Malaysia is slated to become home to an ageing population by 2020, studies indicate. In 2017, 6.2 per cent of the population were above the age of 65. According to Malaysia's Department of Statistics, by 2040 youths and the older population will have a nearly equal population share, a situation compounded by declining fertility rates and increasing life expectancy.

"Development programmes need to focus on monitoring specific needs of the aged, especially for citizens aged 60 years and above," recommended the Department of Statistics' Population and Demography division in 2017.

Malaysian law does not criminalise neglect, and there are no anti-discrimination laws to protect the elderly. The only protection for the older population is under the Domestic Violence Act, which defines them as "incapacitated adults", and the Penal Code.

The issue of an ageing population is not new to Southeast Asia, with countries like Thailand and Vietnam grappling with an older populace and a potentially shrinking workforce. In the 1990s, Singapore passed the Maintenance of Parents Act, giving elderly parents a legal channel to seek financial maintenance and support from their children.

In Malaysia, there is a growing demand for retirement homes as the population ages and more people work.

Federally funded homes are grappling with a lack of carers: while the optimum ratio is one carer to four people, in reality the figure is closer to 1:10, says Women, Community and Family Development Minister Wan Azizah Wan Ismail. Wan Azizah has promised that more would be done to improve retirement-home facilities, including increasing the number of carers and organising activities to keep senior citizens occupied in the hopes of warding off depression.

Although home operators have lauded these moves, many emphasise the importance of maintaining family ties.

"The kids of some older folks who have been left behind - they don't even come over to visit. Some are highly educated and in well-paying jobs but can't even call to check on their parents and haven't paid fees in months," See said.

"One of my residents is 98 and cries every day for her family, but they have not checked on her in a year. I don't understand how people can do this."