Enraged British biker who smashed car windscreen to be charged 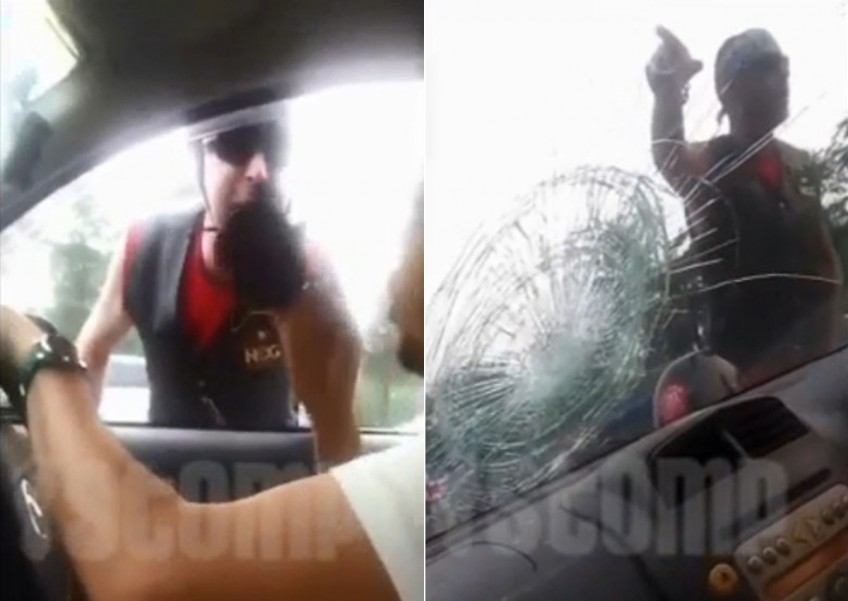 Update as at 4pm on Tuesday (Oct 27): The British biker has been charged with two counts of criminal intimidation but has not pleaded guilty to both charges, according to Malaysian news agency Bernama.

KAJANG - Police in Malaysia are wrapped in a "he said, she said" case of road rage, involving a British national and two Malaysians on the KL-Seremban Highway.

A video of the expletive-filled tirade between the 39-year-old Briton, the driver and his fiance has gone viral on social media.

In the video, the Briton who was riding a Harley, was seen shouting at the MyVi driver claiming that he was nearly knocked off his motorcycle, and that the driver and passenger flashed him an obscene gesture.

"You almost knocked me off, I said don't and then she (pointing to the passenger) gave me the bird. Who the f*** are you?" he was seen saying on the video.

The Briton egged the driver to "get out of the car" for a confrontation, while the MyVi driver responded loudly, asking the motorcyclist to follow him to the police station.

He was later heard calling his father on the phone and asking if he had a "police friend", before informing him that a man had broken his windshield.

The incident, which police said occurred near the Universiti Putra Malaysia exit of the highway at about 6.30pm Sunday, ended with no arrests.

However, Kajang OCPD Asst Comm Willey Richard said the suspect is expected to be charged at the Kajang magistrate's court Tuesday for damage of property and criminal intimidation.