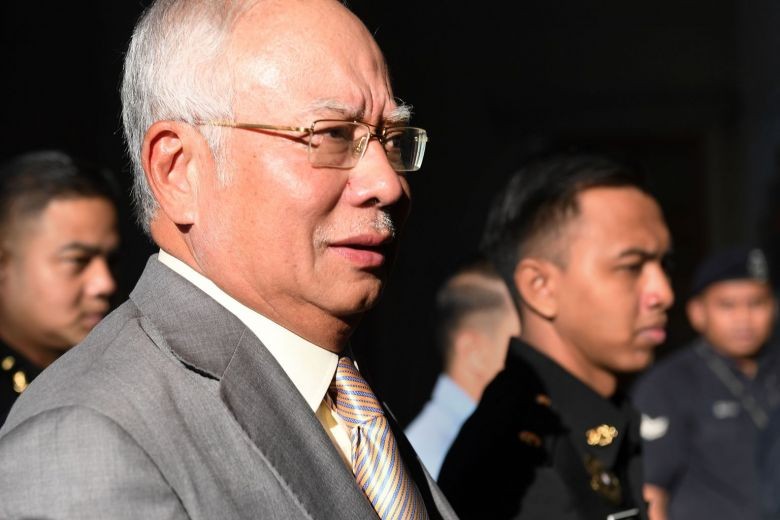 KUALA LUMPUR - Former Malaysian prime minister Najib Razak lost his cool several times during an interview on Friday (Oct 26) with international news agency Al Jazeera as he was quizzed over matters like troubled state fund 1MDB and a pink diamond allegedly gifted to his wife.

He later apologised for his outburst during the interview, explaining that he was concerned about his family at the time, reported Malaysiakini. According to the news site, Najib said he was concerned for his wife Rosmah Mansor and his sons, Norashman and Riza Aziz, who were being questioned by the police on Friday.

"I wish to thank Al Jazeera for the interview and apologise if I had lost my cool. I will not hesitate to say yes should they want to interview me again," said Najib.

During the interview, he said investigators should probe other international figures allegedly involved in siphoning funds from the 1Malaysia Development Berhad (1MDB) scandal, and not just stop at Low Taek Jho, better known as Jho Low.

Speaking to Aljazeera's 101 East programme, Najib said they must be investigated to find out where the money disappeared to.

"Fine… let them do their work but don't just stop at Jho Low. Get others involved as well because there are other international figures who probably are involved. They must also be investigated."

The US Department of Justice (DOJ) has, in its civil suits to seize luxury assets bought with stolen 1MDB funds, alleged that Low was the mastermind behind the misappropriation of over US$4.5 billion (S$6.2 billion) from 1MDB between 2009 and 2014.

"We want to know where the money flowed to. And who really benefited from the whole 1MDB issue. I would like to know too," Najib told Al Jazeera reporter Mary Ann Jolley.

In the hour-long grilling which saw Najib lose his cool a couple of times, he also confirmed that he did not verify the source of the RM2.6 billion (S$860 million) deposited in his bank accounts or who owns the funds, as he assumed that the donations were connected to Saudi Arabia after King Abdullah bin Abdulaziz Al Saud had assured Najib that he would support Najib.

"Because whoever owns the fund is protected by the secrecy of banking laws so when I received the funds, in all honesty I thought it was a genuine donation and at that particular time, the knowledge that I had was based on a conversation with King Abdullah," he said.

When Ms Jolley pointed to him that the DOJ report now clearly shows the paper trail and that he had the powers of the prime minister at that time, he said he would not be able to explain as he had no knowledge at that time.

"Yeah, but prime ministers do not have access to banking information," he added.

Najib currently faces 38 charges of corruption, criminal breach of trust and money laundering, which include allegations that funds found in his bank accounts were misappropriated from 1MDB.

When asked about the 22-carat pink diamond allegedly bought with 1MDB funds and given to his wife Rosmah Mansor, Najib said the US$27 million gem was a gift from United Arab Emirates' Prince Sheikh Mansour.

He also insisted that Rosmah never received the gift.

"It's a matter of dispute what happened to the pink diamond. So let's not jump to conclusions," he added.