Extraordinary day in court for Najib and wife

KUALA LUMPUR - After the end of his case mention at the High Court on Level 5 of the Jalan Duta court complex here, Datuk Seri Najib Tun Razak walked over to the Sessions Court on the second floor to wait for his wife Datin Seri Rosmah Mansor, who was in the midst of being charged with money laundering.

Their extraordinary day in court ended with them leaving together, in contrast with their separate arrivals in the morning.

They held hands briefly as they walked to a waiting black Proton Perdana, which then headed out of the complex at around 12.33pm.

Rosmah was brought to the Kuala Lumpur Court Complex at 8.28am, followed by Najib at 8.40am.

A small band of supporters were there from start to finish. When the couple were walking out together after posting part of the bail for Rosmah, the supporters greeted them by crying out "Datuk Seri" and "Datin Seri".

The former prime minister and his wife did not address the press, but appeared jovial as they made their way to their car.

Flanked by a number of policemen, Najib walked a few steps ahead of his wife.

He smiled and waved animatedly to the dozens of journalists waiting outside the court, at times pausing to smile for the cameras.

Rosmah, who kept her eyes downcast in the morning to avoid the flash of cameras as she walked into the court building, wore sunglasses in the afternoon.

Her face appeared a little red, but she looked cheerful in an orange baju kurung and matching shawl and shoes.

When the press corps asked how she was doing, Rosmah said with a smile: "I am okay."

Apparently aimed at the supporters, she then added, "I love you."

Rosmah had spent Wednesday night in the Malaysian Anti-Corrup­tion Commission (MACC) lock-up. Najib visited her there and posted a status on his Facebook telling her not to lose faith in God.

Actress Ellie Suriaty Omar was among the couple's few supporters seen waiting outside the court complex. 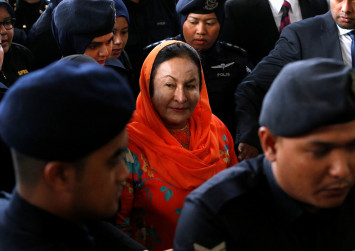 No Umno leaders were there other than controversial blogger Wan Muhammad Azri Wan Deris, better known as Papagomo, who is part of the Umno Youth exco, and Supreme Council member Datuk Lokman Noor Adam.

Najib and Rosmah's youngest son Norashman Najib was also present in court to show support for his mother.

Pressmen from local and international organisations, who had been on the court grounds since 6.45am, easily outnumbered the supporters.