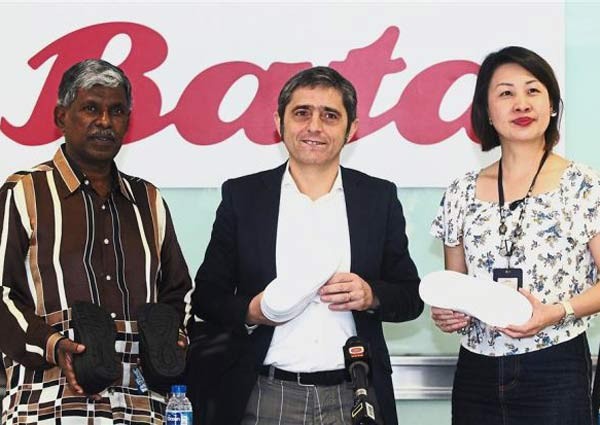 In the clear: Grassi (centre), Selvaraj and Wong showing that the soles of Bata’s B-First shoes do not have holy verses on them during the press conference at Menara Bata in Petaling Jaya.
The Star/ Asia News Network

PETALING JAYA - Fake news resulted in shoe company Bata Primavera Sdn Bhd losing more than RM500,000 (S$157,847) within a month after an allegation went viral about the company selling shoes with the Arabic word "Allah" formed in the pattern on the soles.

Since the controversy surfaced in cyberspace in February, Bata was forced to withdraw 70,000 pairs of the B-First school shoes from its 230 stores nationwide, said company country manager Paolo Grassi.

The shoes were returned to the shelves only after Bata was cleared of the allegation by the Al-Quran Printing Control and Licensing Board of the Home Ministry on Thursday.

"That episode not only cost us to lose money, but our image suffered as well.

"We are relieved to be cleared by the authorities. To show our sincere efforts to respect the cultural and religious sanctity of the people of Malaysia, we will produce new mouldings for the B-First shoes after the existing stock is sold out by June this year," he told reporters at Menara Bata here yesterday.

"We have been cleared by the ministry. Should anyone continue to put Bata in a bad light after this, we will not hesitate to take legal action," he warned.

On Feb 8, the principal of Sekolah Agama Bandar Batu Pahat had released a letter to its students forbidding them to buy Bata's B-First school shoes, claiming the shoes had the holy verse on the soles.