IPOH - In another blow to Malaysian wildlife, a two-tonne elephant has been found dead - this time, electrocuted by a live wire from roadworks.

The female pachyderm was believed to be rummaging for food when it was electrocuted after destroying a cabin set up by contractors carrying out roadworks near Tasik Banding in Gerik.

The 40-year-old elephant might have been pregnant or recently gi­­ven birth as it was producing milk. 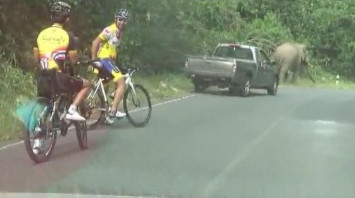 Perak Wildlife and National Parks principal assistant director Wan Shaharuddin Wan Nordin said the elephant was found dead at about 7.30am yesterday although it could have been electrocuted much earlier.

"We immediately alerted Tenaga Nasional Bhd to disconnect the supply," he said, adding that no criminal element was found in the case.

The deaths of a sun bear and a tapir due to road accidents on Christmas Eve have alarmed conservationists. The carcass of the tapir was later skinned by a group of men.

Last year, a calf and a 10-year-old elephant were killed by vehicles along the Gerik-Jeli Highway.

The Management & Ecology of Malaysian Elephants, which has been tracking the herd the female elephant belonged to, said the animal might either be pregnant or had just given birth.

"We are not sure about this at the moment but there was milk coming out from its breasts," said its field manager Alicia Solana. "It is very common for them to roam around this area beside the highway as there is plenty of grass and suitable food."

Solana said it was believed that the elephant was electrocuted after pushing against the zinc wall of the cabin.

"It is a big loss emotionally for this herd as we see them very often," she said.

Ecotourism and Conservation Society Malaysia co-founder and CEO Andrew Sebastian said contractors should have been more alert and careful when setting up cabins in areas with wildlife.

"There are plenty of signboards along the Royal Belum-Temenggor and East-West Highway warning motorists and the public about the presence of elephants," Sebastian said.