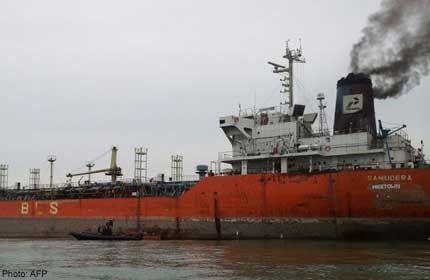 PONTIAN - It was a fiery nightmare for a group of crewmen who were trapped in a burning vessel used to transport oil.

"I could only think of my three-year-old daughter when we were trying to escape the burning vessel," said one of the survivors of MT Samudera, Abhishek Kumar.

The 30-year-old from Calcutta said he was thankful to God that he and his friends managed to escape the flames.

Officials from the Malaysian Maritime Enforcement Agency (MMEA) managed to save 22 crewmen but one man is still trapped on board the vessel which has been burning about 2.6 nautical miles south of Pulau Kukup here for close to two days.

"I was on duty inside the engine room when the fire broke out and things just turned chaotic.

"Without warning, a blast occurred in the ship's engine room and we just could not put out the flames," he said adding that the incident occurred at around 3.30pm on Sun­day.

He said he has been a crewmen for the past seven years and this was the first time he had been involved in such an incident.

Another crewmen, Pardeep, 27, said he felt sad for fellow crewman, Giridher, who is still trapped.

"We have no clue if he is still alive, but the chances are slim," he said, adding that the group only realised Giridher was missing when they were in the lifeboat.

Meanwhile, MMEA Johor Baru enforcement chief Capt Aminuddin Abd Rashid said they were trying their best to stop the fire from spreading to other parts of the ship.

"Once we have put out the flames, we will launch a search for the missing crewman," he said.