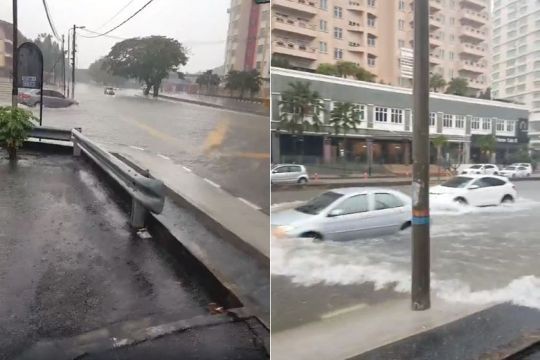 Several roads in the Penang capital of George Town were affected by the floods.
Facebook/Patrick Ooi

Roads in the towns of Bayan Baru and Bayan Lepas as well as low-lying areas like Jalan Mahsuri, Jalan Mayang Pasir, Lebuh Mayang Pasir and Jalan Kampung Relau were affected by the floods.

The flood waters, however, receded by 1pm.

The Penang International Airport (PIA) experienced flight delays for around half an hour due to the downpour.

PIA senior manager Mohd Nadzim Hashim said the flight delays happened between 10.30am and until slightly after 11am.

Penang Welfare, Caring Society and Environment Committee chairman Phee Boon Poh said the floods were not caused by drainage issues but the intensity of the downpour.

"These weather conditions are expected and we have to be mentally prepared for this kind of weather due to climate change," Phee said.

"There are currently 14 tropical storms including three hurricanes in the South China Sea and Pacific Ocean. We expect weather like this from now until the end of the year," he added.

Phee said precautionary measures had already been taken to ensure that should there be an emergency, there were teams for evacuation and rescue on standby.