PETALING JAYA: A viral photo allegedly showing Musang King durians being rejected for export to China due to high levels of insecticide has been rubbished by a local food blogger.

According to a viral message with an attached photo making the rounds on social media, the piles of durians depicted apparently had too high levels of insecticide to be accepted into China and so were being sold locally at cheap prices.

However, a report by a local food blog, http://www.placesandfoods.com, has debunked the story. 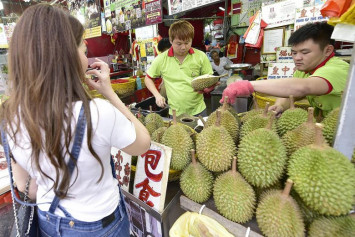 It pointed out that durians slated for export to China are frozen, regardless of whether they are to be exported whole or in packets, which did not appear to be the case with the durians in the photos.

It was also reported that Malaysian durians are only harvested once they have fallen from their branches and therefore have a short shelf life.

Therefore, Malaysian durians would not last a return trip from Malaysia to China and back again.

The report also questioned why durian traders would transport the rejected durians back to Raub and Bentong to sell at a lower cost, as claimed in the viral message.

It explained that the lower durian prices in the two areas were because of their proximity to durian orchards.