KUALA LUMPUR - Malaysia's football body was fined US$30,000 (S$41,000) on Tuesday after the national team's fans chanted "dogs" at supporters from Singapore and Brunei during matches at the Southeast Asian Games.

Malaysian supporters chanted "Brunei dogs should just be killed" during their side's 2-1 victory over the neighbouring country on August 14 at the Kuala Lumpur-hosted tournament, the Asian Football Confederation (AFC) said.

Two days later the fans also chanted that Singaporeans were "dogs" as Malaysia beat the city-state 2-1.

The AFC's disciplinary committee fined the Football Association of Malaysia US$15,000 for each of the offences. 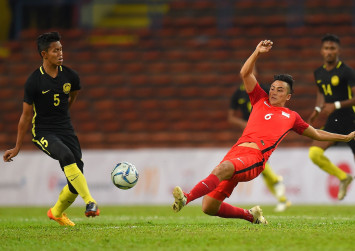 The AFC also issued a warning to the Hong Kong Football Association after home fans booed the Chinese national anthem during an Asian Cup qualifier against Malaysia this month.

"A repeat violation may result in a more severe punishment," the disciplinary committee warned.

Fans in the semi-autonomous territory have repeatedly booed the "March of the Volunteers" anthem despite warnings from football authorities and fines from world body FIFA.