PUTRAJAYA - Umno president Datuk Seri Dr Ahmad Zahid Hamidi has showed up at the Malaysian Anti-Corruption Commission (MACC) headquarters for yet another round of questioning on Yayasan Akal Budi.

The former deputy prime minister was his jovial self and waved to the press when he came out from a white SUV at the lobby of the MACC headquarters at 9.15am on Thursday (Oct 11).

It is the second time this week that Dr Ahmad Zahid had been summoned by the graft busters.

On Wednesday (Oct 10), Dr Ahmad Zahid spent eight hours at the MACC to be interrogated over alleged misappropriation of funds belonging to his family-run foundation.

Although MACC had said Nurulhidayah and Mohamad Nasaee would not be questioned on Thursday, Dr Ahmad Zahid's daughter came to the headquarters 10 minutes after her father arrived. 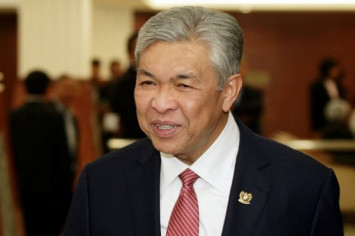 It is not known if she is here merely accompanying her father.

Dr Ahmad Zahid was first questioned on the Yayasan issue on July 3.

He was then asked to explain claims that RM800,000 belonging to the foundation was used to pay off credit card bills.

Dr Ahmad Zahid is the chairman of the foundation, which was set up by his family with a mission to receive and administer funds to help the poor as well as provide Islamic education.

The Bagan Datuk MP also had his statement recorded by the MACC on July 2, but that was believed to be on investigations into the 1Malaysia Development Bhd (1MDB) scandal.