Yesterday, Najib, who is already facing 32 charges over the scandal-ridden sovereign fund, arrived at the MACC building at 10am and left six and a half hours later.

He managed to evade the press by entering and exiting the building through a back entrance.

MACC sources said Najib was being investigated over a fresh case related to 1MDB.

"This is related to 1MDB, but different from what he has already been charged with," said the sources. 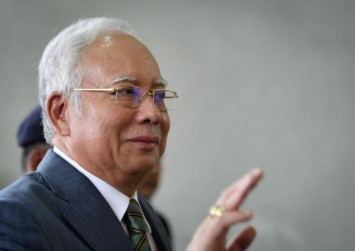 It is believed that the investigation is over payment of a loan by 1MDB to Interna­tional Petroleum Investment Company.

MACC had earlier hinted that Najib could be hit with even more charges on top of the 32 he is already facing.

On July 4, Najib pleaded not guilty at the Kuala Lumpur High Court to a charge of using his position for gratification and three charges of criminal breach of trust involving RM42mil from SRC International.

He pleaded not guilty to all charges.

Journalists waiting for Najib at the MACC headquarters also spotted Mahdzir, who is Umno vice-president, at the building.

MACC sources later said he was there in relation to a funds embezzlement case involving the solar energy project for Sarawak schools.

Mahdzir had previously responded to the allegations and said he was willing to co-operate with MACC investigators on the matter.

The former deputy prime minister was questioned on the alleged misappropriation of funds belonging to Yayasan Akal Budi, a foundation set up by his family to help the poor and provide Islamic education.