PUTRAJAYA - Datuk Seri Najib Tun Razak and a former key official of his government will be jointly charged with criminal breach of trust, said to involve more than RM 6 billion (S$1.99 billion).

The two are to be charged in the Kuala Lumpur Sessions Court over 1MDB’s dealings with Abu Dhabi’s wealth fund International Petro-leum Investment Company (IPIC).

Separately, another top official from the previous administration will also be charged in court.

The Malaysian Anti-Corruption Commission said it had received the go-ahead from the Attorney General’s Chambers to charge Najib, Dr Mohd Irwan and Hasanah with committing criminal breach of trust involving the government’s money.

With Dr Mohd Irwan being hauled to court, it will be the first time a former civil servant is being charged in connection with the sovereign wealth fund scandal. 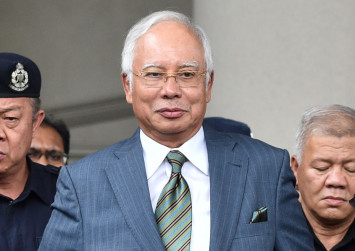 As for Najib, the number of charges against him is now close to 40. He is already slapped with a total of 32 charges today involving corruption, criminal breach of trust and money laundering.

Sources with knowledge of the case confirmed the number of charges and that the amount of money involved in the 1MDB-IPIC scandal “runs into billions”.

Yesterday, both Najib and Dr Mohd Irwan were summoned by investigators. Both came separately at 1.55pm and 3.25pm respectively.

At 5pm, Najib left the Malaysian Anti-Corruption Commission headquarters despite earlier speculation that he would be held overnight.

On the previous occasions, prosecutors had held the former prime minister and brought him to court the next day.

While Najib was released after giving his statement, MACC confirmed that Dr Mohd Irwan was arrested at 3.35pm and was being held overnight. Dr Mohd Irwan had made several trips to the MACC regarding the 1MDB-IPIC case, the last being on Aug 10.

Graft investigators had probed both Najib and Dr Mohd Irwan on 1MDB’s dealings over settlement payment of US$1.2 billion (S$1.66 billion) made to IPIC in 2017.

As for Hasanah, the former director-general of Malaysian External Intelligence Organisation is being charged with criminal breach of trust involving money belonging to the government.

She is being held answerable to committing one count of criminal breach of trust by misappropriating funds worth US$12 million said to be meant for the 14th General Election.

Despite earlier talk that Hasanah would also be held, sources said she was asked to present herself in court today instead.

Hasanah was among nine people who were remanded in September over the misappropriation of the fund.