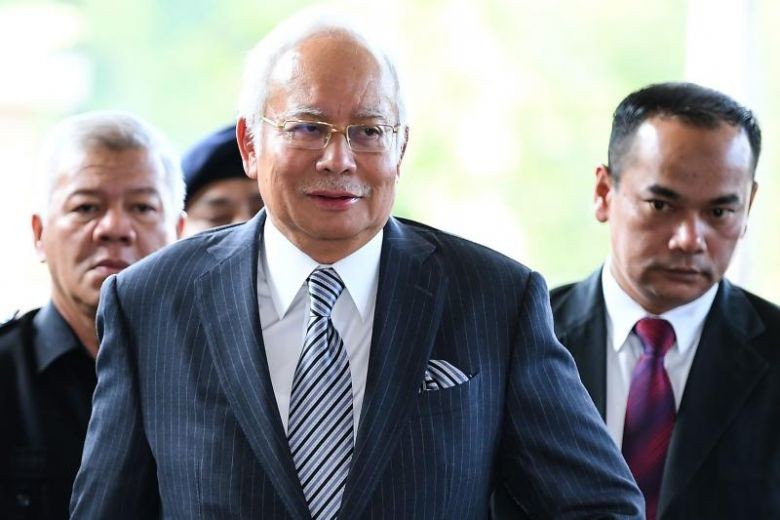 PETALING JAYA - Former Malaysian premier Najib Razak wants the police to return the RM116.7 million (S$39 million) seized from premises linked to him in May, because no legal action has been taken regarding the funds in over three months.

The former premier claims most of the funds belonged to political party Umno, which he headed until he stepped down as president after losing the general election in May.

"I have commented on the matter numerous times in the local media but I choose to explain in more detail, as the police still insist on not returning the money.

"This is despite several efforts and negotiations conducted," he said in a statement on his Facebook page on Sunday (Sept 9).

Najib insisted the money should be returned, as it has been more than three months since its seizure and, according to the law, it must be returned if no prosecution has been made.

The funds formed part of a haul of cash, jewellery, watches and handbags worth a total of between RM900 million and RM1.1 billion that was seized in police raids relating to investigations into state fund 1Malaysia Development Bhd (1MDB).

The former prime minister currently faces charges of criminal breach of trust, abuse of power and money laundering relating to RM42 million allegedly transferred into his accounts from SRC International, a former subsidiary of 1MDB.

Najib also explained that it was normal practice for the Umno president to handle donations and party assets, including transferring and making payments during elections.

"Such tasks and rights are enshrined in the party's constitution and it has been so since the tenure of Tun Dr Mahathir Mohamad (as president)," he said, referring to Prime Minister Mahathir who used to helm Umno and now leads the ruling Pakatan Harapan coalition.

During the last general election, most of the donations from businessmen and individuals were in cash and it was distributed to all 222 parliamentary and 505 state constituencies, Najib said, adding that political donations are not against the country's laws.

"When Dr Mahathir built the Prime Minister's Office and Seri Perdana, he also ensured that a vault and a safe were built at the respective locations.

"These are the locations where the cash received was stored for the purposes of political and election operations, including settling various bills after the elections as well as funds for branches' operations," he said.

After Najib's Barisan Nasional coalition unexpectedly lost in the May election, the cash was gathered and temporarily transferred to the Pavilion Residences in Kuala Lumpur, he explained.

"I was also informed recently that a few officers had stolen RM3.5 million when transferring the cash and they were detained by the MACC (Malaysian Anti-Corruption Commission).

"The police raided the apartment and seized the money even before we could make a decision on how to manage the cash while waiting for who will take over as the new party president," he said.

"I reaffirm again that it is party funds, thus Umno has sought legal representatives to negotiate with the authorities to return the money," said Najib.

In June, the police announced that cash seized from its raids amounted to RM116.7 million in 26 currencies.

Najib said in his post on Sunday that most of the money was in ringgit while only a small portion of the cash was in foreign currencies.

The former prime minister said he would, at a later date, also explain about the seized jewellery and handbags, which have become fodder for gossip and speculation.