Musa’s lawyer Francis Ng then asked for the court to grant a full acquittal to avoid the charges hanging over Musa’s head.

Justice Jamil allowed the application and ordered for a discharge amounting to an acquittal on all charges.

Read Also
Najib a victim of a scam, says lawyer 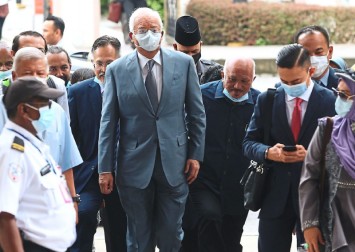 In a statement Tuesday, Musa thanked the prosecution and the judiciary for its objectivity, professionalism, impartiality and conduct without prejudice in evaluating the facts of the case since two years ago.

“The application to strike out the prosecution was filed early this year and was done in a meticulous manner and supported with statements and documents that were clear and undeniable proofs,” he said.

Musa said what has happened to him was due to “political differences” and took it as a test from God for him and his family.

Musa was first charged in November, 2018, with 35 counts of under Section 11(a) of the Malaysian Anti-Corruption Commission (MACC) Act 2009 for accepting gratification by an agent where he allegedly received a total of US$63 million (S$88 million) in Hong Kong and Singapore as an inducement for offering timber concessions in Sabah.

In March 2019, Musa was brought to court for the second time to face 16 charges of money laundering involving US$37.8 million and S$2.5 million, amounting to about RM160 million in total.

In October 2019, the prosecution dropped five out of the 35 charges of graft against Musa and made amendments to the existing 30 charges then relating to the dates, transactions and names of contractors.