Formula One: 'You idiot!' - 5 talking points from Malaysia

SEPANG - Five talking points from the final running of the Malaysian Grand Prix on Sunday.

A furious Fernando Alonso labelled Kevin Magnussen "an idiot" and claimed the rest of the drivers agreed with him after they clashed on lap 33. Alonso shouted on team radio "Hulkenberg was right", a reference to the Renault driver calling the Dane "an a***hole" after Magnussen forced him off the track at the Hungarian Grand Prix in July. Magnussen told the German to "suck my b***s" in response. After the race Alonso wasn't finished. "For his driving, we more or less agree with the other drivers, it's 19 to one," he told reporters.

Sergio Perez was struck down with a sickness bug in Malaysia but somehow managed the almost superhuman effort of finishing sixth for Force India at the most physically demanding grand prix on the calendar. Perez felt so bad he thought might have to miss the race and thanked doctors for getting him through despite the heat and humidity. "It was probably the hardest race of my career," he said.

- Despondent Bottas to 'look in the mirror'

While Lewis Hamilton was extending his championship lead at Sepang, teammate Valtteri Bottas admitted he was searching for answers after finishing in fifth behind Vettel who has started from stone last. "Being honest, it may be the most difficult time of my career so far, in terms of how it feels every time I go in the car," said Bottas. "If I keep doing races like this for long, that is not going to be a good thing for anyone. Like I said many, many question marks. I need to have a good look in the mirror again." 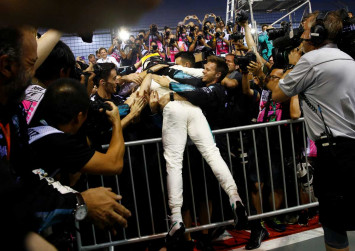 Red Bull chief Christian Horner hailed victorious Max Verstappen and compared him to four-time world champion Sebastian Vettel. The result ended a tough run for Verstappen, without a podium since China in April. "Max is a very different character to Sebastian but what you see in standout drivers, you see similarities," Horner said. "Where Sebastian was very strong under big pressure moments, Max has that ability too. He was so cool today leading the grand prix. He was the coolest guy out there."

Jolyon Palmer's blamed a gust of wind in Malaysia for wrecking his chance of a top-10 finish for the second successive race. The British driver who is being replaced by Carlos Sainz at Renault next season was 12th and closing on Hulkenberg before he went off and allowed Alonso to pass him. "We saw there was a big tailwind, which is affecting you in the tow, and you're in the gust. I turned in pretty much the same as the other laps and suddenly I had no rear. Then just one lap, it was very different to the other laps, it really caught me by surprise."