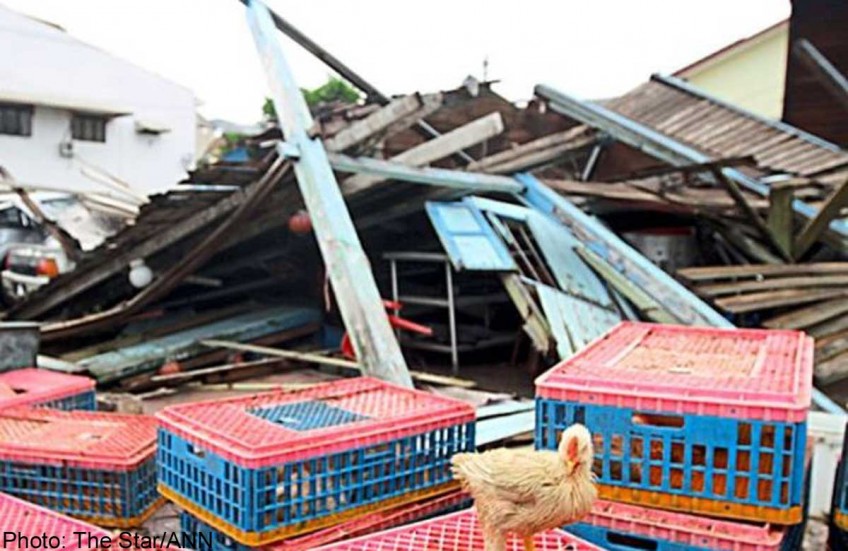 In ruins: One of the 20 houses destroyed by the freak storm as a drenched chicken managed to escape from a plastic cage.

MALACCA - A freak storm wreaked havoc when it ripped through three villages in Durian Tunggal.

The raging wind and torrential rain left a trail of destruction in its wake - destroying 20 homes and da­­ma­ging 117 houses and three cars.

The 20-minute storm struck at 5.30am yesterday, just as residents were finishing their sahur meal.

No serious injury was reported al­­though Mohd Jefry Suhaimy Mohd Fir­­daus, nine, required four stitches on his head after being hit by debris.

Businesswoman Suraya Abu Sa­­mah, 40, said she lost all the Hari Raya kuih that was supposed to be delivered to her customers tomorrow.

She said the storm just ripped off the roof of her family's wooden shop and the heavy rain drenched everything.

"It happened in just a blink of an eye. The rain destroyed all the kuih on the table as well as my electrical appliances. I could only watch helplessly," she said.

Four family members, who were helping with preparing the kuih, ran helter skelter before taking shelter inside a car, added Suraya.

She said although she had expe­rienced a similar storm in 1991, the damage was extensive this time.

Villager Aminah Ahmad, 60, said rain water inundated her home after the zinc roof was blown off, ruining her furniture and other belongings.

"This year, Hari Raya won't be as festive for us because we will have to hold our reunion at our relative's house," she said.

Alor Gajah MP Datuk Koh Nai Kwong said all those affected by the storm had lodged police reports, adding that each would be given between RM200 and RM2,000 in financial aid.

Another RM5,000 would be also distributed under his parliamentary Mesra Rakyat allocation, he said.

"We will concentrate on providing additional assistance to the 20 villagers who suffered the most damage in the incident," he said.