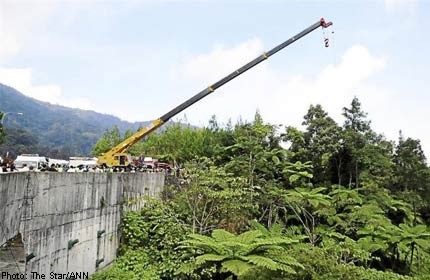 A construction crane with a long boom is used to lower firemen to where the bus lies.

GENTING HIGHLANDS - Fire and Rescue Department personnel were faced with an enormous task when they rushed to the scene of a bus crash at Genting Highlands. The shattered bus lay some 60m in a ravine near the Chin Swee Cave temple and bodies were everywhere.

A rescuer from the Special Malay­sia Disaster Assistance and Rescue Team (Smart), who declined to be named, said mangled bodies were everywhere, adding that he had never seen carnage on such a scale.

Firemen used a construction crane with a long boom to lower the firemen to where the bus lay. The victims were brought up on a gondola attached to the boom of the crane.

"It was a race to find the survivors because we all knew time was running out," said Civil Defence Depart­ment (JPAM) officer Mohd Safari Nasaruddin, 29. "It was the first time I've seen so many bodies and I couldn't stop to think about it."

It was the worst road crash in the country's history. Thirty-seven people were killed and 16 others injured after the bus went out of control, rammed a road barrier and plunged into the ravine.

The stage bus, which was ferrying 53 passengers, was reportedly "wobbly" before ramming into a barrier and plunging into a 60m ravine at Km3.5 of the Genting Highlands road while heading back to Kuala Lumpur at about 2.20pm yesterday.

The site where the wrecked bus lay was said to be a gory one.

He said the first victim was hoisted to safety at 3.38pm.

"A total of 456 personnel from various agencies including the Fire and Rescue department, the police and Smart and Civil Defence department took part in the operation."

Housing and Urban Wellbeing Minister Datuk Abdul Rahman Dahlan said the bus was a 44-seater and most of the passengers who survived the crash were seated at the back.

Asked if the bus was overloaded, Rahman replied: "You do the math."

Rescuers had to rely on cranes as well as the Fire and Rescue department K-9 unit to search for victims. Rescue operations were hampered by a downpour.

At around 6pm, it started raining, with winds bringing in mist to envelope the hill slope where the wrecked bus was lying on its side. The situation was tense as rescuers moved quickly to extricate bodies.

As night fell, rescue personnel put up spotlights to help in the search. Rescue operations ended at 10pm.

Many people were waiting at the Selayang Hospital to find out if their loved ones were among the victims.

A check with JPJ showed the bus was blacklisted.