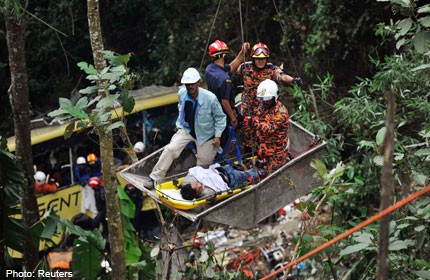 KUALA LUMPUR - All efforts should be focused on saving the victims of the horrific bus crash in Genting Highlands, and not on pointing fingers at anyone, said acting Transport Minister Datuk Seri Hishammuddin Hussein.

He said he did not want innocent parties to be blamed in this highly emotional situation.

"The most important thing now is to identify whether any survivor has been left behind," he told reporters during the Defence Ministry's Hari Raya open house here yesterday.

Hishammuddin, who is also the Defence Minister, expressed his condolences to the families of the victims and gave his assurance that the Government would leave no stone unturned in uncovering the cause of the incident.

"I have asked the agencies under the Transport Ministry, including the Road Transport Department, to start investigating the cause of the incident.

"I don't want to say more than that because efforts are still under way to rescue those who are still trapped," he said.

Hishammuddin said this was not the first such incident to occur at Genting, adding that there were many factors which could have caused the 2.20pm crash to happen, whether it was the fault of the driver, the vehicle, the road, or a combination of these.

"As long as I am heading the ministry, we will ensure that no innocent party will be made a victim out of something I believe everyone sees as a tragedy," he said, adding that he was awaiting further reports on the situation.

According to Liow, the bus was "very wobbly" moments before the accident.

"This could mean that it may not have been in the best condition," he said after a briefing by rescue personnel at the site.

"I don't want to speculate. Some say it was the driver's fault, while some said it was the brakes. Let's leave it to the investigations.

"But what is clear is that bus companies have not taken past incidences here seriously. They should be making sure their buses are well-maintained and their drivers healthy."