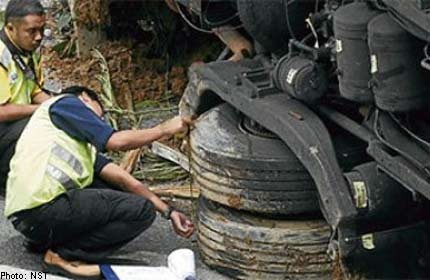 Investigators examining the wreckage of the bus that plunged into a ravine in Genting Highlands.

MALAYSIA - Rescue personnel had a close call when the stage bus they were lifting from Wednesday's crash site started leaking fuel.

About 100 firemen and police personnel at the scene reacted immediately to avert another catastrophe.

As soon as the wreckage was laid down on the road after being hauled up by a mammoth crane, diesel started flowing from the fuel tanks onto the road.

Recovery personnel scrambled to put sand and earth as well as sawdust from their rescue vehicles to plug the tanks.

Before anyone could breathe a sigh of relief, a foreign worker ambled into view with a lit cigarette, risking a massive conflagration, just metres from the wreckage.

An alert policeman shouted at the foreign worker, who immediately stubbed out his cigarette.

Operations to lift the 14.5 tonne wreckage from the 60m-deep ravine began at 10am .

Genting Fire and Rescue Department chief M. Mahandran said rescuers did not find any signs of a fuel leak when conducting search and rescue operations following the accident.

The bus was lifted vertically after a hook was attached to its towbar.

"We saw diesel leaking from the bus as soon as it was placed on the road. We are just glad the bus didn't explode," he said, adding that the bus had about 20 litres of diesel left in its tanks.

The bus was only moved after the tanks were emptied.

"We scaled down to the wreckage 30 minutes after the accident, and as we neared the scene, some of the survivors called out to us, asking to be saved.

"By the time we got to them, some of them could not hold on any longer. I saw several of them die in front of me," said Mahandran.

His biggest relief was when he saw two survivors trapped in the last row of the bus.

Bentong district police chief Superintendent Mohd Mansor Mohd Nor said Puspakom and Road Transport Department engineers would examine the wreckage to determine the cause of the accident.

The bus was taken to Bentong police headquarters, and operations to clear the scene of the crash was called off at 4.15pm yesterday.

The bus was carrying 53 passengers when it plunged into the ravine, killing 37 and injuring 16.

Of the total, six remained unidentified. Of the five identified, three were confirmed as foreigners. He said 25 bodies had been released to their next of kin.

He also called on those with information that could lead to the identification of the victims to come to HKL's Forensics Department.

Dr Subramaniam said all 16 survivors were recovering. One was moved to the normal ward from the intensive care unit (ICU), after showing progress.

In George Town, a wake was held for one of the victims, Tan Chor Boon, at his home in Sungai Pinang.

His sister, Choo Kee, 60, said her brother, who worked at a resort in Genting Highlands was headed for Kuala Lumpur to seek medical attention.

Tan leaves a wife, five daughters and two sons. His remains will be cremated at the Mount Erskine crematorium at 2pm on Sunday.