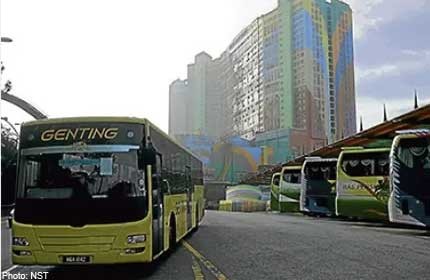 The bus station at Genting Highlands. Drivers are assigned a bus each and assume responsibility for it.

KUALA LUMPUR - A minimum of eight trips a day, six days a week, each lasting 11/2 hours, with only a 20-minute break in between journeys, negotiating treacherous bends up and down Genting Highlands.

These were also the same conditions which had allegedly irked Lim Kok Ho, the driver of the ill-fated bus which plummeted down a ravine on Wednesday.

The incident left 37 dead and 16 injured. It is acknowledged as the worst bus crash in Malaysian history.

Colleagues described Lim as someone who was used to order and system, based on his previous stint at a bus company in Singapore.

A bus driver, who only wanted to be known as Aji, said Lim, who was employed only two months ago, was known for his low tolerance for delays.

"He does not speak much and is rather impatient. I was told that Lim used to work for a bus company in Singapore, where things were systematic and organised, compared with the terminals and operations here.

"He was the type who got annoyed when there were delays," he said at the Jalan Pekeliling Bus Terminal here.

Aji, who has 28 years' experience as a bus driver, said even with his knowledge of the route, he always exercised caution on the slopes.

The highland slopes, he said, could be deceptive, with its sharp bends.

"There are several bends where even the most experienced drivers will slow down to negotiate.

"The stretch where the incident occurred is a new addition to the existing road. In the past, it was a single lane route.

"Upon reaching the bend, I will shift the automatic gear from D to one or two after slowing down, which means applying the brakes."

He added that the bus Lim was driving had been recently upgraded, but only the refurbishment of its interior.

Another bus driver, Azrul Izam, who has been with the company for seven years, said driving up and down the slopes required certain skills.

He said drivers were assigned a bus each and assumed responsibility for the vehicle, except when it underwent monthly service.

Maintenance work or lubrication services are done by the company, with service certificates and road-worthiness documentation displayed in the bus.

Azrul said stage buses, which are lower in height and provide more stability, were used.

However, this means that drivers need a bigger radius and lower speed to negotiate bends.

"For new drivers, the first few trips, which normally take 11/2 hours from KL to Genting, can be tricky, but it becomes easier with each trip," he said, adding that bus services started from 7am and ended at 1am daily.

Genting Highlands Transport staff manning the ticket counter at the Jalan Pekeliling terminal said there was a 30 per cent dip in ticket sales yesterday.

Checks with some visitors, including five from Beijing, showed that they were aware of the incident, but group representative Austen Xia said they were not perturbed and attributed the incident to fate.