Get a move on Causeway congestion, urge users

JOHOR BARU - While proposals from the Special Cabinet Committee to tackle persistent congestion on the Causeway here have received positive feedback, many are wondering when they will be implemented.

Atirah Nordin, who works as a shop assistant in Singapore, said the solutions outlined would only make a difference when put in place.

"They all look good on paper and I am sure it will be effective in easing the congestion here but we need to see them implemented before we can feel relief, " the 36-year-old said.

"I hope they will not take too long to study and discuss the matter but instead take immediate action as it has been a problem which has been tormenting us for years."

Another frequent traveller, clerk S. Avines, 23, said the most obvious step to take was to deploy more immigration officers at checkpoint counters.

"Widening the Causeway may help reduce the congestion, but the more important thing is to have more counters open, especially during peak hours.

"Increasing manpower should be the primary focus right now, and I hope the government will hire additional staff as soon as possible, " he said. 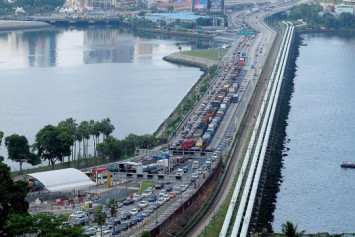 Stulang assemblyman Andrew Chen Kan Eng, who was also the chairman of the taskforce previously appointed by the state government to solve the congestion at the Causeway and Second Link, believed the suggestions by the committee would not only reduce congestion but also make it safer for users.

"The proposal for a covered walkway will help a lot of bus users as they will be able to walk safely when their buses are stuck in traffic, which is practically all the time.

"I think this is an immediate need, and I hope the Federal Government will ensure the plan for the walkway proceeds smoothly, " he said, adding that he would provide as much assistance as needed to the Home Ministry and the Special Cabinet Committee.

"Easing congestion between Johor and Singapore will attract more investors into Johor.

"Investors will be more tempted to set up their operation base in Johor while having their regional headquarters in Singapore, " said Puah, who also supports the covered walkway besides having a single border control agency.

A Bernama report, quoting Foreign Minister Datuk Saifuddin Abdullah, said that plans were afoot to increase Immigration and Customs personnel, among others.