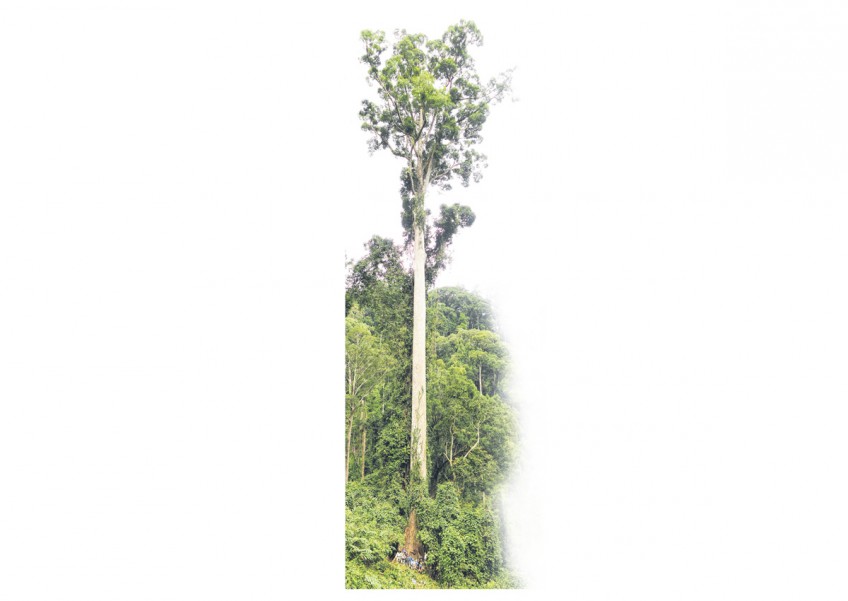 A towering giant has recently been discovered in the heart of Borneo, the most imposing of its kind in a land of giants.

The world's tallest tropical tree stands at over 94m - taller than New York City's Statue of Liberty or the former Asia Insurance Building at Raffles Place.

Researchers found it in a protected Sabah forest and are hoping that the discovery will highlight the need to conserve the forests of Borneo, home to thriving wildlife and plants.

Said ecologist Gregory Asner, who found the tree with his colleagues: "Sabah (and Borneo in general) harbours some of the most spectacular tropical trees on earth. I have worked throughout the Amazon, Central America, on tropical islands including Madagascar, in tropical Africa and beyond, and yet Sabah's forests stand out as truly inspiring."

The Shorea faguetiana tree first caught the eye of researchers last year when Dr Asner and his colleagues were surveying Sabah's forests in a helicopter.

That was when they struck gold and found the tree that turned out to be 94.1m tall, with an immense canopy measuring 40.3m in diameter, in an undisturbed forest patch in Danum Valley. Even better, they also found 49 other specimens taller than 90m spread all over Sabah, all of which would have crushed the previous record for tallest tropical tree.

Describing the moment he saw the tallest among them, Dr Asner, director of the Carnegie Airborne Observatory at the Carnegie Institution for Science in the United States, told environmental news site Mongabay it was flanked on each side by a tree of the same species of Shorea, each almost as tall.

"There are three trees, like brothers, standing above the rest of the canopy. I almost cried as we circled the tree maybe 10 times before the pilot said we had to go back," he said.

It was reportedly spotted during a research project that used an airborne Lidar (Light Detection and Ranging) scanner to create 3D images of forest structure.

News of the latest record prompted Datuk Sam Mannan, the Chief Conservator of Forests at the Sabah Forestry Department, to organise an expedition to locate the tree and determine what species it was.

After trekking through a forest trail on Feb 22 this year, the team found the tree on a slope at about 359m above sea level.

Mr Juanis Runcin of the Sabah Forestry Department then climbed the tree to obtain leaf samples so that the tree species could be identified.

Researchers said they are not sure why it has been able to grow so tall but Mr Sam Mannan believes this could be due to genes and the need for the mature tree to rise above the canopy to survive.

"There is much to be known about our natural ecosystems, as in this case, the previously assumed height of Shorea faguetiana was only 50m to 60m tall," he added.

The team will be making recommendations for the management of the area. This includes installing equipment, such as lightning rods, to protect the trees from damage.

"The new discovery will add value to the Danum Valley Conservation Area and its surrounding forest reserves. It is important to conserve such pristine forests. Mature reproductive trees are essential for maintaining forest health and its ecology," said Mr Sam Mannam.

According to the World Wide Fund for Nature, Borneo is estimated to contain 15,000 plant species and may have the highest plant diversity of any region on earth.

Many of Borneo's plants are also found nowhere else in the world.

Dr Robert Ong, senior research officer from the Sabah Forestry Department, said it is likely that the biggest and tallest trees in Sabah were destroyed many years ago when large areas of the most fertile lands were logged and cleared for agriculture.

"As that is all part of our history that is poorly documented, we will never know for sure," he said.

For now, remote sensing technology, such as Lidar, has made it possible to detect tall trees by scanning large forest landscapes from an aircraft some 4,570m above sea level, said Dr Ong.

"Formerly, we had to scale trees individually to determine their height accurately."

Dr Shawn Lum, Nature Society (Singapore) president who is also from the Nanyang Technological University's Asian School of the Environment, said that trees in South-east Asia have generally been known to be taller than those in Africa and the Amazon, but this discovery has astounded even seasoned forest experts.

Noting that Shorea faguetiana was never thought to be able to reach heights of 90m prior to the discovery, he added: "Have we been underestimating heights or overlooking such great trees simply because they are so hard to access?"