Gridlock in Johor Baru as Malaysians try to leave for Singapore

People walk across the Causeway after the Malaysian Checkpoint on March 17, 2020.

JOHOR BARU - With less than an hour to midnight, long lines of vehicles and people have formed leading to the Bangunan Sultan Iskandar Customs, Immigration and Quarantine Complex here on Tuesday (March 17).

The congestion started as early as noon following talk that Malaysia will be closing the border to daily commuters beginning Wednesday (March 18).

Pedestrians were seen hauling their suitcases walking along the many roads leading to the checkpoint as well as the causeway.

The congestion created by those entering is severe, with traffic on the EDL being held at a snails' pace for seven kilometres all the way to The Mall Midvalley Southkey, while congestion on the Tebrau highway has passed Plaza Pelangi.

Those heading to Singapore via any of the roads in the city should expect to add at least two hours to their travel time.

Meanwhile, a check by The Star at the Customs, Immigration, and Quarantine Complex (CIQ) Sultan Iskandar Building (BSI) and Sultan Abu Bakar Complex (KSAB) at the Second Link showed that traffic leaving Johor for the island republic was smooth-moving.

Meanwhile, Johor Mentri Besar Datuk Hasni Mohammad said a special committee has been formed to prepare a mitigation plan between Malaysia and Singapore regarding the Covid-19 pandemic.

He said that the committee would be chaired by him along with Defence Minister Datuk Seri Ismail Sabri and a Cabinet Minister from Singapore.

"Prime Minister Tan Sri Muhyiddin Yassin has agreed to form the special committee between Malaysia and Singapore for the preparation of a mitigation plan tackling issues involving the movement of people, goods and services between the two countries. 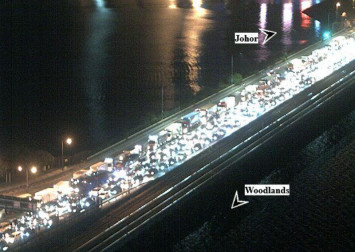 "The committee was given the mandate to prepare the mitigation plan that could manage the interests of both Malaysia and Singapore, especially on security and movements of Malaysians working in Singapore," he said in a statement released here on Tuesday.

He added that the committee would then present its proposals to the Prime Ministers of both countries for further action.

Hasni also said that the committee will also provide current information on the situation on the ground from time-to-time.