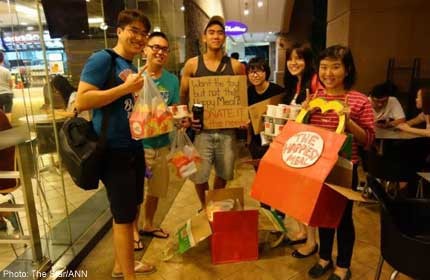 PETALING JAYA - A group of employees from an advertising agency has decided to take advantage of the current "minion craze" to help the less fortunate.

So far, the team from Creative Juice Kuala Lumpur has collected about 170 Happy Meal sets from those who had queued for hours at McDonald's outlets just to get the toys.

The food was then donated to homeless people here.

The minions - little cylinder-shaped, mischievous characters from the animated film Despicable Me and Despicable Me 2 - have taken the country and the rest of the world by storm with toys resembling them flying off the shelves.

McDonald's, which began offering these toys with its Happy Meal every Thursday beginning this month, has seen crazed fans lining up outside its outlets by midnight.

The toys were sold out at many locations within three hours of its midnight release on Thursday.

Creative Juice KL's creative director Vijay Anand, 35, said they came up with the idea after seeing pictures of people with trolleys of Happy Meals from McDonald's just to get their hands on the toys but then wasted the meals.

"We decided to go to a few outlets here to see whether anyone would donate the food to us, instead of disposing of it.

"We only had 12 of us in the team but managed to collect about 170 meals on Thursday morning when the toys were released," he said.

The food, he said, was distributed to homeless persons in the Petaling Street and Masjid India areas as well as to an orphanage.

"We have received calls from people in Johor and Penang who were inspired by our project and wanted to do the same there as well," he said.

A check on online trading websites such as mudah.my showed some Malaysians selling these toys for up to RM1,000 for a set of three minions from McDonald's.

The price of a Happy Meal set is below RM10.

Besides its physical outlets, McDonald's is also dealing with the minion craze on its Facebook page.

"Anyone willing to exchange 3rd week minions? I have Week 2 minions for exchange, location Penang," posted one of the many users trying to sell and exchange their toys.

Another user, Chew Yi Hong, posted: "Please, no more minions. Everybody is going crazy. For the sake of humankind, please stop selling minions!"

Among the popular Happy Meal toys over the years included the Transformers, which are now highly prized among collectors, Hello Kitty, Legos and Teletubbies.