Guns tough to get - but not on black market 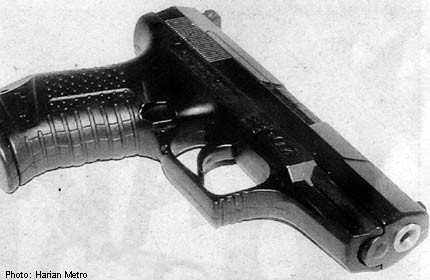 MALAYSIA - It is not easy to buy firearms legally in Malaysia and some say it is easier to get one on the black market.

Someone who wants to buy a gun has to obtain a permit from a local police station, which can take up to two years.

Mr Kamis Yunos, a weapon sales executive in Petaling Jaya, Selangor, said the company has few walk-in customers given the strict requirements. Demand for weapons mainly comes from government or quasi-government agencies such as the Customs and Anti-Corruption Commission.

Individuals who do purchase guns from the company are usually politicians and businessmen.

"We have to check with the police first to verify the firearms permit before allowing our customers to view the weapons, and even then, we only show them the replica and not the real weapon," he told The Straits Times on Tuesday.

Individuals, he said, usually buy shotguns priced at RM4,000 (S$1,563) and up, as they are lighter and easier to carry than a rifle.

The police do not disclose gun ownership numbers. But according to a 2007 survey by Cambridge University, Malaysia has some 370,000 privately owned firearms, or 1.5 guns per 100 people.

Gun owners have to undergo a fitness test every year, which includes shooting tests, to ensure that they are fit to handle the weapon. "Those found to be unfit will have to surrender their weapons to the police," Mr Yunos said.

Malaysia has among the strictest gun ownership laws globally.

If a person is found guilty of possessing or using a firearm without a permit, he can be fined RM10,000 or jailed up to seven years, or both, as well as whipped. Anyone found guilty of using firearms to hurt or kill someone faces a mandatory death sentence.

Professor P. Sundramoorthy, a criminologist at Universiti Sains Malaysia, said given the strict firearms laws, it puts off most people from owning guns illegally.

"Malaysians face severe consequences for owning guns without permits, let alone use them, so why bother?" he told The Straits Times on Tuesday.

Renting them on the black market, though, is a different matter, crime experts say.

Mr S. Gobi Krishnan, a co-founder of MyWatch, a crimewatch group, said guns can be rented for as little as RM300 for three hours.

Bullets are 80 sen each.

"It started as a favour of borrowing guns among friendly groups, then it became rental,"

Mr Krishnan was quoted as saying to The Malay Mail, an English daily, on Monday.

Meanwhile, Transparency International Malaysia president Akhbar Satar also recently said that one may hire a hitman in Malaysia for as low as RM1,000.

Still, finding a gun on the black market requires some effort.

"You may have to get to know people in the underworld and gangs to get them," said Prof Sundramoorthy.

[[nid:31206]]
SUBSCRIBE TO OUR NEWSLETTER
Your daily good stuff - AsiaOne stories delivered straight to your inbox