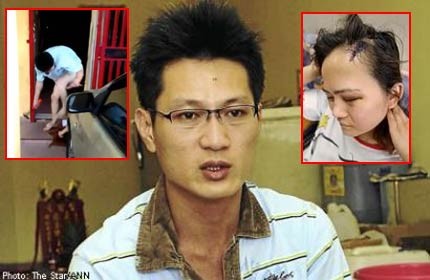 Sion Khong Poh, a chicken wing stall operator who was allegedly caught on camera hitting his ex-girlfriend with a hammer.

SEREMBAN - A man allegedly caught on camera hitting his ex-girlfriend with a hammer, leaving her needing 30 stitches on her head, has pleaded not guilty to a charge of causing grievous hurt.

Sion Khong Poh, a chicken wing stall operator, claimed trial to the charge after it was read to him by a court interpreter before magistrate Mohamad Izwan Mohamed Noh.

The 33-year-old, who was said to have been in a relationship with 29-year-old Lin Pui Lee for a decade prior to the incident, allegedly committed the offence at his home in Taman Jasper Jaya at about 8.30am last Saturday.

He was charged under Section 324 of the Penal Code for causing hurt with a weapon and faces a jail term of up to three years, fine and whipping if convicted.

Deputy Public Prosecu­tor Nabilah Mohammad pressed for a RM6,000 bail pending re-mention of the case as the police tied up the loose ends into their probe.

However, the accused, who was not represented, urged the court for a lower bail as he could not afford the proposed amount.

Seremban OCPD ACP Saiful Azly Kamaruddin said the police decided to charge the suspect as the case was of public interest.

Another woman was seen trying to stop the beating, while a voice was heard pleading for the beatings to stop.

[[nid:34710]]
SUBSCRIBE TO OUR NEWSLETTER
Your daily good stuff - AsiaOne stories delivered straight to your inbox