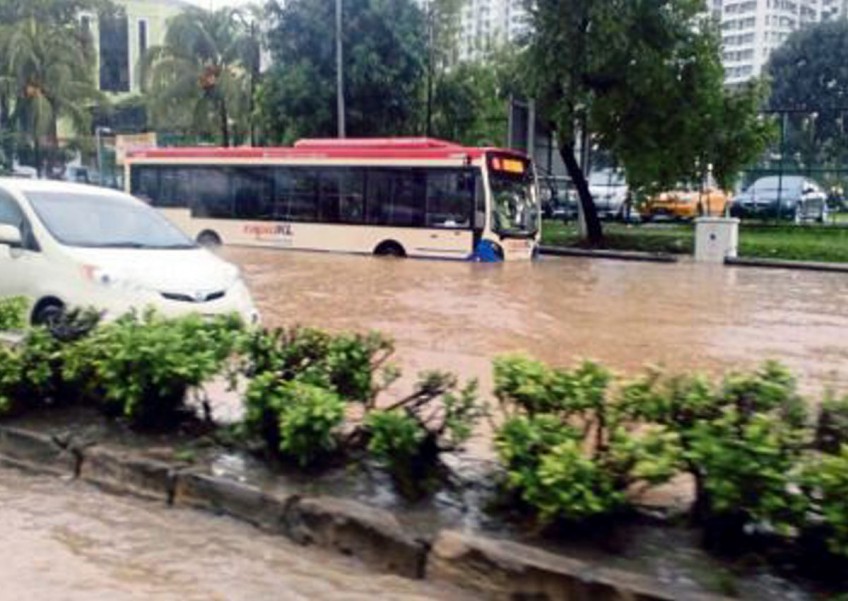 KUALA LUMPUR - Chaos erupted in major parts of the Klang Valley and in Johor after torrential rains lashed some areas, causing flash floods.

Motorists were caught in a gridlock and stranded for several hours when major roads in Shah Alam, Kuala Lumpur and Johor Baru were flooded after heavy rains yesterday afternoon.

Dozens of cars were also submerged in water, while the KTM Bhd commuter service was cancelled after the tracks at the Batu Tiga station were submerged for several hours. Commuters had to wade through ankle-deep muddy water.

A landslide occurred near Jalan Raja Chulan in Kuala Lumpur and the Kewajipan roundabout in Subang Jaya.

KL Fire and Rescue Department operations director Azizan Ismail said the landslide occurred around 1.30pm when loose soil on a slope slipped down and damaged a nearby restaurant's gas line.

"No one was injured in the incident," he said.

He added that the slope was being monitored for further soil movement.

The landslide near the Kewajipan roundabout in Subang Jaya caused a 4km traffic crawl along the Kesas Expressway from 3pm.

"Another major crawl was in Seksyen 13, Shah Alam, where a flash flood had caused a 5km-long traffic crawl from 4.30pm," she said.

The radio station also reported that vehicles at the Shah Alam Interchange were caught in a long crawl from Setia Alam after all highway lanes were flooded.

Flash floods were also reported in Section 13, Section 9, U8 and Batu 3 in Shah Alam, causing a crawl along Persiaran Sukan, Persiaran Hishamuddin and Persiaran Kayangan.

At 5pm, the Shah Alam toll plaza at Bukit Jelutong, which leads to the NKVE highway, had to be closed to traffic due to rising flood waters.

Vehicles were seen cautiously making their way through the flood waters to reach the toll plaza while residents in Bukit Jelutong braced themselves for the possibility of rising waters.

Traffic along the Guthrie Corridor Expressway was also backed up from Bukit Jelutong to the Batu 3 Industrial Park.

The drains in SS14 Subang Jaya could not cope with the incessant downpour, causing an overflow into the streets and nearby petrol stations.

Subang Jaya councillor Ken Chia said he was inundated with messages from concerned residents over the rising water levels.

Selangor exco member in charge of infrastructure Zaidy Abdul Talib said the cause of the severe floods in Bandar Puncak Alam was due to excess rainfall.

"Accumulated water due to heavy rains in the area could not flow out and the retention ponds were filled with overflowing excess water," he said in a statement.

According to Zaidy, short-term measures would be carried out including cleaning up all water outflow conduits.

"The long-term measures that will be taken will include deepening of retention ponds to contain more water during heavy rainfall," he added.

In Johor Baru, several major roads in the city were cut off, with police saying that floodwaters rose as high as 1.5m at some places when the floods occurred after 1.30pm following a downpour.

In Kuching, about 400 villagers of Kampung Peninjau Baru in Bau were trapped for more than two hours when their village was flooded after Sungai Sarawak Kiri overflowed its banks at 2pm.

However, no villagers were evacuated as the floods receded several hours later.