PETALING JAYA - Prime Minister Tun Dr Mahathir Mohamad seemed to have walked back from an earlier decision when he told a Japanese publication that the high-speed rail project had been merely postponed, not cancelled.

Speaking to Nikkei Asian Review on the sidelines of the Future of Asia conference in Tokyo, he said Malaysia cannot afford the project at this moment but signalled that the door is still open.

"We cannot say we will never have high-speed rail (HSR) in Malaysia. What we can do is we can postpone the project because it is far too costly at this moment," he said.

Dr Mahathir said Malaysia would need an HSR but it is something to only consider in the future.

After being sworn in as prime minister, he had announced on May 28 that Malaysia will be dropping the HSR project with Singapore, citing it as an "unnecessary project".

However, in his interview with Nikkei Asian Review, Dr Mahathir commented that the Singapore HSR project is merely postponed.

"We actually postponed the implementation of that project.

"So we need to rethink high-speed rail," he said.

Dr Mahathir also suggested the possibility of building an HSR "right through the Peninsula". 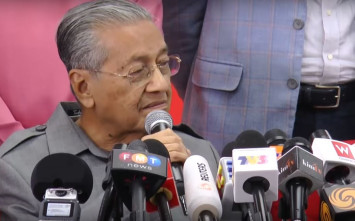 Last month, Finance Minister Lim Guan Eng also said the Government's decision to scrap the HSR project was not only due to the high price tag of building it, but also steep cost burden to maintain the 350km link in the longer term.

This decision was also part of cost-cutting moves to slash the federal government debt of over RM1 trillion, Lim said.

He told the South China Morning Post that the new administration estimated the initial cost of the high-speed rail project was likely to be more than RM100bil.

Singapore's Ministry of Transport said it had yet to receive an official notification that the project had been cancelled.