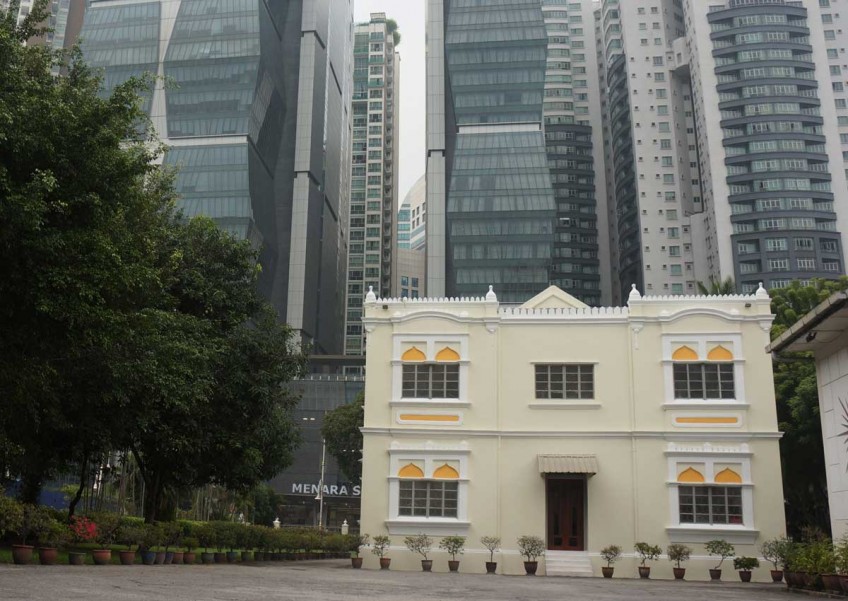 The Vivekananda Ashram, built in 1904 and sitting near the KL Sentral skyscrapers, was slated to be redeveloped into condominiums, but protests put a halt to the plan and its fate is undecided.
The Straits Times

The blue plastic basket dangled on a pink raffia string before a woman standing on the pavement. She placed a package inside, and it was swiftly whisked up to a second- floor shophouse.

"Yes, yes, it's normal," said Mr James Rama, chairman of the Brickfields branch of the neighbourhood organisation Rukun Tetangga. No one batted an eyelid at it, or at a man riding a bicycle decked with Malaysian flags.

Brickfields is a colourful neighbourhood filled with a vastly diverse people crammed into a small area between a railway line and Klang River.

Located just a few kilometres from downtown Kuala Lumpur, Brickfields shares a border with the swish Bangsar neighbourhood, while the KL Sentral transport hub sits at its northern fringe. It now has a population of 50,000 residents.

One of the earliest KL neighbourhoods, Brickfields had once housed the city's support services in the 1880s, attracting a mishmash of communities. Shops and places of worship soon sprung up, along with less savoury trades, creating a heady mix of people and culture.

A Chinese temple still sits next to a golden-domed mosque, with incense and the azan (the Islamic call to prayer) wafting across their shared wall. Not far away are two churches, a Buddhist temple and a Hindu one. Elegant buildings from an earlier time share walls with the grimy structures of today, and the underbelly of society shares pavements with high-minded social organisations.

"There are multiple communities living side by side in this small area," said Ms Elizabeth Cardosa, executive director of the Malaysian Heritage Trust.

Brickfields' story is intimately tied to that of modern KL. It began as a brick-making centre - literally - that supplied bricks to KL in the 1880s. By the early 1900s, the brickworks vanished as Brickfields became a railway hub to serve the tin industry.

Brickfields may even have had a small part in building Singapore, as its bricks were also shipped there.

But the place is now under threat as developers clamour to exploit its enviable location and good transport links. The rush towards development began in the mid-1990s when the KL Sentral transport hub was built on the site of the railway's South Goods Yard.

In June this year, 100 century-old houses, charmingly called 100 Quarters, were demolished, possibly for the construction of condominiums. Just before that, the Vivekananda Ashram built in 1904 was slated to be redeveloped into condos, but protests halted the plan.

To many, all this marks the start of the slide of one of KL's most evocative and multicultural neighbourhoods into bland modernity, and the loss of a place that still showcases the best side of Malaysia's religious harmony, which is now being sorely tested.

Mr Balan Moses, 60, a newspaper editor who has written books on Brickfields, grew up in one of the 100 Quarters houses which the government rented to his father for a generous $10 a month. He said Brickfields was a special place to grow up in because there was such a spirit of community, with all kinds of people able to mix because there was so much open space then.

Ms Ivy Josiah, 60, who lived there from 1955 to 1987, said it is unique for its colourful people and institutions, and the strong sense of community that still exists.

"Our house was almost like a longhouse as the wooden divider between the terraces could be removed to form a large terrace for funerals and weddings," she recalled.

It is this multicultural life that defines Brickfields for its residents, past and present, rather than its predominantly Indian population, which is a legacy from the past.

Residents are quick to point out the dozens of Chinese shops in their midst, such as the Kwong Fook Cheong wholesaler, which has been selling grains and onions for the last 20 years from an outlet that looks like it has never had a facelift.

About 40 per cent of the population today is of Indian descent. Many of the earlier families had arrived as railway workers, and later as civil servants as government housing was built in the area.

Others then came because they had family there - such as the father of Mr Paramasivam Selvaraj, who started the Sivam Hair Dressing Saloon (spelt with the distinctive double "o") over 60 years ago.

"All of our family members are here," said Mr Paramasivam, 63, who has inherited the business.

It was in 2010 that a part of Brickfields formally became "Little India", when one street got dressed up with purple paint, a new fountain, arches and lamp posts. The City Hall turned this street into a colourful one with shops selling Indian fashion, food and prayer items.

This was done for the visit of then Indian Prime Minister Manmohan Singh, and at a time when Malaysian Prime Minister Najib Razak was wooing the Indian community, which had shunned his Barisan Nasional coalition.

As a tourist lure, the rebranding worked. Florist Sivamoly Sinniah, 42, is happy that more visitors are buying flowers from his shop, which has been there for 20 years.

But some regarded it as a political move with an outdated world view.

"The country is already so divided, so this was really not necessary," said Ms Ivy.

Mr Balan agreed, saying Brickfields' heritage is really more of a Malaysian one.

Ms Cardosa said Little India was really a tourism product, which did not adequately describe the complexities of Brickfields, as it suggested a Tamil-Hindu cultural heritage when the neighbourhood was much more multicultural.

The impending changes to Brickfields are perhaps inevitable, but many want to retain its inclusive, open and colourful character.

"People hope to see change for the better. That's the primary thing behind the protests: What is the change for?" said Ms Cardosa.