Weariness began to set in among Malaysians on Wednesday (Nov 23) as the country's post-election political impasse lingered, though there were positive signs for those backing reformist opposition Anwar Ibrahim as the next prime minister.

King Sultan Abdullah Sultan Ahmad Shah's convening of a special meeting with the nation's other hereditary sultans suggested a resolution was in sight and he was ready to seek their consensus to endorse a prime ministerial nominee.

Following meetings with Anwar and rival Muhyiddin Yassin on Tuesday, the king held talks the next morning with the leader of the Barisan Nasional bloc that could prove vital in ending the deadlock.

Both Anwar's multi-ethnic Pakatan Harapan alliance and Muhyiddin's conservative Malay-Muslim Perikatan Nasional bloc require the backing of some or all 30 Barisan Nasional MPs to gain a parliamentary majority and form the next government.

Barisan Nasional's chief Ahmad Zahid Hamidi said after the meeting that Sultan Abdullah had "decreed" a unity government be formed.

Two sources independent of each other told This Week in Asia that Muhyiddin had flatly rejected the idea of a shared arrangement, while Anwar was amenable to the proposal floated by the king on Tuesday.

Barisan Nasional, which had been the de facto ruling alliance before the election, suffered heavy losses in Saturday's vote and initially resolved to sit out of any coalition government on account of being "rejected" by the people.

Ahmad Zahid's comments to the Malaysiakini news portal on Wednesday suggested this position had changed following his royal meeting.

"Tuanku's decree was to form a unity government," he told Malaysiakini, using the Malay term for His Majesty. When asked if Barisan Nasional would stand by its position not to back any other political coalition in forming the federal government, Ahmad Zahid replied: "That is not Tuanku's order."

Perikatan Nasional was not out of the picture, however. Some members of the bloc and Ahmad Zahid's Barisan Nasional were seen entering St Regis Hotel in Kuala Lumpur for what local media termed as an "unofficial meeting".

Ahmad Zahid was not there, though Barisan Nasional heavyweights Mohamad Hasan and caretaker prime minister Ismail Sabri Yaakob were seen entering the hotel.

Malaysian social media users meanwhile have lamented the absence of a new prime minister four days after the polls, while many shared memes lampooning the country's seemingly unending situation of political musical chairs.

Read Also
Who is Malaysia's king and why is he picking the prime minister? 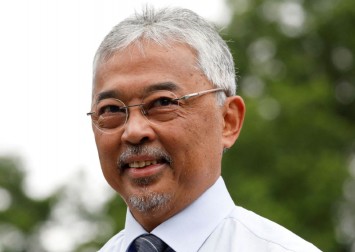 Amid a proliferation of racial vitriol by some commenters opposed to Anwar and his multiracial bloc, others shared anecdotes and pictures of their kinship with those of other ethnicities using the hashtag "#kitakawan" (we are friends).

Observers have suggested that Muhyiddin's Perikatan Nasional, which includes the hardline Islamist PAS, had emerged as a potent force in part because of its use of rhetoric that Malay-Muslim rights would be eroded if the multiracial Pakatan Harapan alliance came to power. Minority groups make up 40 per cent of the country's 32 million people.

Attention will next turn to the special meeting of the Sultans on Thursday. A statement from the National Palace said the meeting was "meant for His Majesty to obtain the views of the other Malay rulers, to allow him to make a decision for the sake of the interest and well-being of the country and rakyat".

This is not the first time Sultan Abdullah and his fellow royals have been thrust into a troubleshooting role in the country's often tumultuous politics.

In 2020, when the government of veteran leader Mahathir Mohamad collapsed, Sultan Abdullah chose Muhyiddin as premier after interviewing all 222 lawmakers to decide who had majority support. When Muhyiddin's bloc also fell, the king chose the current caretaker prime minister, Ismail Sabri.

Under the constitution, Malaysia's king has powers to appoint as prime minister the MP who in his judgment would be likely to command the confidence of most of parliament.

The role of king, or Yang di-Pertuan Agong, is rotated among the heads of the country's nine royal households for five-year terms. The media-friendly Sultan Abdullah, 63, is the head of the royal household of Pahang in central Peninsular Malaysia.