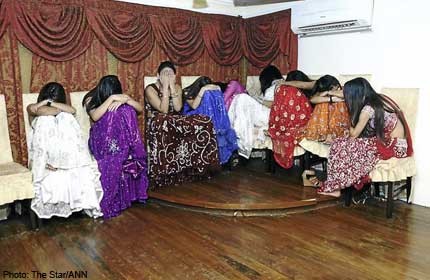 <p><span style="font-family: Verdana, Arial, Helvetica, sans-serif; font-size: 12px; line-height: normal;">Some of the GROs waiting to be interviewed after they were rescued from a premises along Jalan Inai, Kuala Lumpur.</span></p>

KUALA LUMPUR - A human trafficking syndicate specialising in luring women from South Asian countries to work here as guest relations officers (GROs) was busted after police rescued 15 of its victims following a tip-off.

Police rescued the 15 women after receiving a tip-off from the Pakistan Embassy and an e-mail from the family of one of the victims.

It is believed that the syndicates forced the victims to work as GROs in the premises that operates as a restaurant during the day while offering other services in the night.

SAC Jalil said police also arrested three locals and an Indian national, acting as a runner, who were working in the premises.

He said the syndicate lured the women by offering them waitressing jobs at hotels in Kuala Lumpur.

"Some were also offered jobs as cultural and traditional dancers.

"When they arrive here, the women would then be forced to work as GROs," he said.