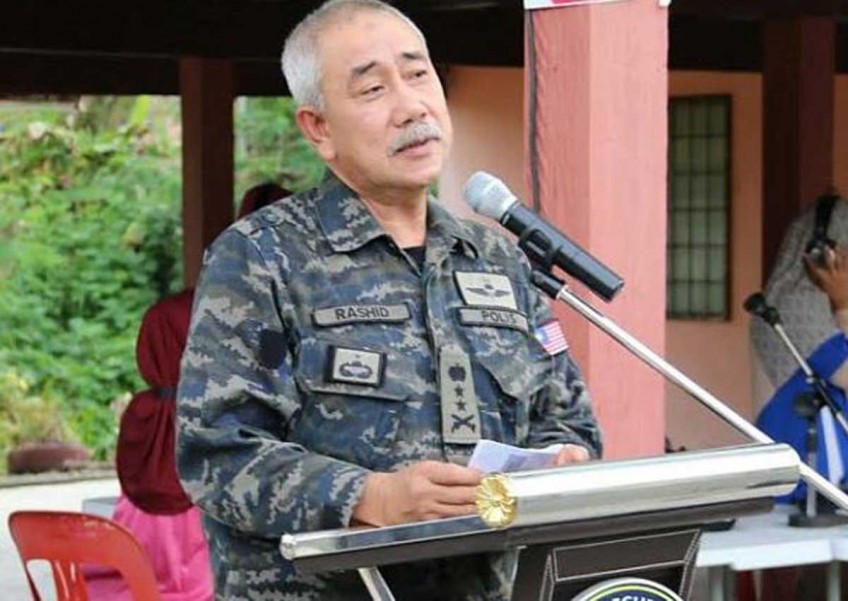 KOTA KINABALU - Security agencies under the Eastern Sabah Security Command (Esscom) have launched a hunt for the group of gunmen who snatched three Indonesians in Sabah waters Sunday.

Sabah Police Commissioner Datuk Abdul Rashid Harun (pic) said the authorities had also informed their counterparts in the Philippines about the incident that occurred just before midnight Saturday.

Five armed men, some in military fatigues, slipped into the high-security waters of Tungku in Sabah's east coast Lahad Datu district to grab the three fishermen from a Malaysian-registered fishing trawler.

It could not be ascertained which group is behind the latest incident, though suspicion is falling on an Abu Sayyaf sub-commander known as Apo Mike, who has been responsible for several recent kidnappings involving sailors on tugboats plying the international waters between Sabah and Philippines.

Rashid said according to initial reports, five armed men were on a speedboat that pulled up near the trawler.

Three of the suspects armed with M14 and M16 rifles boarded the trawler and ordered the crew of four Indonesians and three "pelau (sea gypsies)" to gather at the bow, he said.

The gunmen asked for their passports and took the three Indonesians while the pelau, who did not have any documents, were released, he said, adding that no shots were fired.

The kidnappers, who spoke in poor and broken Malay, also seized the special permit allowing the crew to be in the curfew zone during curfew hours, six handphones and the trawler registration card before fleeing.

The abducted Indonesian Timorese men have been identified as Lorence Koten, 34, Teo Dorus Kopong, 42, and Emanuel, 46.

Police said that based on the description given by the freed men, the kidnappers are in their 30s and 40s.

No ransom demand has been received, Rashid said.

The latest kidnapping comes just as the Philippines military launched a massive crackdown against the Abu Sayyaf in Jolo and Basilan where over thousands of troops have been deployed.

The Abu Sayyaf is threatening to behead a Norwegian citizen if a 250mil peso (RM25mil) ransom is not paid. They are also holding seven Indonesian sailors kidnapped on June 22 and demanding 20mil pesos (RM2mil) for their release.

This is the latest in a series of kidnappings by kidnap groups that had also grabbed four Malaysian sailors off Pulau Ligitan in Semporna on April 1. All four were released unharmed last month.

Abu Sayyaf: We are going to behead Norwegian hostage